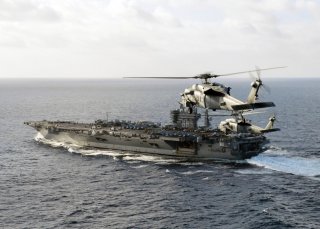 Here's What You Need to Know: Despite the extreme or provocative language used by the Chinese newspaper, the actual presence of the ship may not be a warfare mission, but rather an attempt to better map the region to avoid accidents in international waters.

China is accusing the United States of strengthening support for submarine warfare against Beijing because the U.S. Navy has been operating an oceanographic survey ship in the South China Sea.

The operations of the U.S. Navy ship, as cited in the Chinese government-backed newspaper the Global Times, are intended to “Collect underwater geographical and hydrological data to support its submarine warfare in the region against China.”

Despite the extreme or provocative language used by the Chinese newspaper, the actual presence of the ship may not be a warfare mission, but rather an attempt to better map the region to avoid accidents in international waters.  It makes sense that the U.S. Navy might want to take some additional measures in response to the recent incident in the Indo-Pacific region wherein a U.S. Seawolf-class submarine struck an object while submerged.

The incident is under investigation, according to a Navy report, which stated that there are no life-threatening injuries from the collision. Could it have been some kind of undersea structure, mountain, cavern or ridge? There have of course continued to be longstanding efforts to generate the most detailed maps possible of the region for the purpose of maritime navigation and intelligence gathering.

The Chinese report said the United States is most likely trying to learn more about the undersea components of the region, something which would certainly make sense. The Navy does seem to be operating a greater number of undersea missions in the area and attack submarines are without question increasingly being used for surveillance and reconnaissance missions, given that they can more easily access areas less accessible to larger, deeper draft surveillance ships and of course remain less detectable.

The USS Connecticut, a Seawolf-class fast-attack submarine, struck some kind of “object” which may have been underwater terrain or something of great relevance to undersea navigation. Clearly sending an oceanographic survey ship would greatly help the Navy develop a deeper and more detailed intelligence picture of the undersea terrain in the crucial and highly contested region.

The number of island chains and the expanse of ocean areas across which they span creates a pressing need for the Navy to operate coastal surveillance missions, and given the recent breakthroughs in the realm of “quieting” technologies, submarines are increasingly well-positioned for clandestine undersea reconnaissance missions.

While certainly there is an intelligence-gathering or “war preparation” and “deterrence” element to mapping the undersea terrain in preparation for warfare, yet gathering information about a highly sensitive and disputed area under threat of Chinese aggression is not necessarily an act of “being at war.” It would seem to fall within the broad parameters of the Navy’s much-discussed “deterrence” missions in the region.