Missile Madness: Why Does the Pentagon Want So Many New Missiles? 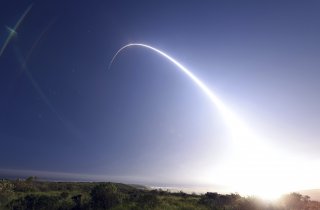 Here's What You Need to Remember: Together, all these new weapons could help the U.S. armed forces to defend itself, and strike back, during high-intensity combat with Russian and Chinese forces.

Missiles are everywhere in the U.S. Defense Department's budget proposal for 2020.

The emphasis on long-range, guided munitions should please critics of Pentagon's war-planning. Experts have warned that in combat with a high-tech foe, U.S. forces quickly would run out of ammo.

The Defense Department asked Congress for $12 billion for missiles, with a strong emphasis on multi-role munitions capable of hitting a wide range of targets as well as on missile-defense interceptors and land-attack and anti-ship missiles.

For 2020 the department highlighted the 10,200 Guided Multiple Launch Rocket System rockets it wants to fund for the Army and Marine Corps at a cost of $1.4 billion, the 125 SM-6 the Navy is requesting for $700 million, the 430 Joint Air-to-Surface Standoff Missile the Navy and Air Force would get for $600 million and the 48 Long Range Anti-Ship Missile, together costing $200 million, that the Navy wants.

The GMLRS are artillery rockets that can travel as far as 50 miles. The Army and Marine Corps are developing new tactics for firing GLMRS at ships in order to expand the Army's maritime role and help the Navy and Air Force sink enemy fleets.

The SM-6 is the Navy's latest multi-role missile. It can target aircraft, ships and even other missiles. The JASSM is a stealthy cruise missile that's compatible with the Navy and Air Force planes. The LRASM is a version of JASSM that Lockheed Martin tailored for sinking ships.

The SM-6, JASSM and LRASM all likely can travel hundreds of miles. The military hasn't revealed their exact performance specs.

Those are just the weapons that Shanahan's office wanted to spotlight. The Army's part of the 2020 budget proposal also asks for $340 million to buy 240 Army Tactical Missile System. ATACMS launches from the same tracked and wheeled vehicles that fire GLMRS rockets. But ATACMS is larger than GLMRS is and boasts a 190-mile range.

The Tomahawk variants, each capable of flying around 800 miles, are America's longest-range cruise missiles. The NSM is an over-the horizon anti-ship missile that the Navy is adding to its Littoral Combat Ships.

Together, all these new weapons could help the U.S. armed forces to defend itself, and strike back, during high-intensity combat with Russian and Chinese forces.

"The U.S. and its allies notoriously keep underestimating how many smart weapons they’ll need for a shooting war, then start to run out against enemies as weak as the Serbs or Libyans," Breaking Defense reporter Sydney Freedberg, Jr. explained. "Against a Russia or China, which can match not only our technology but our mass, you run out of munitions fast."

Ochmanek and other experts told Freedberg that the Pentagon should set hard goals and buy all the missile it needs to achieve them. For example, "sink 350 Chinese navy and coast guard vessels in the first 72 hours of a war, or destroy 2,400 Russian armored vehicles," Freedberg reported.

Congress likely will modify many of the Pentagon's budget requests before it approves funding.

David Axe served as Defense Editor of the National Interest. He is the author of the graphic novels War Fix, War Is Boring and Machete Squad. This article first appeared in March 2019 and is being republished due to reader interest.