Monthly Stimulus Checks for Kids? Joe Biden Has a Plan. 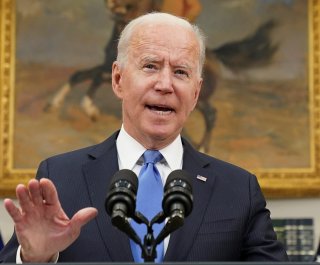 Here's What You Need to Remember: Will the permanent checks end up on the final bill? That’s unclear. Per the Business Insider account, Biden told the Congressional Hispanic Caucus after a meeting last month that he would love to make the checks permanent, but that he didn’t think he could get such legislation through the Senate.

In the American Rescue Plan that passed earlier this year, one provision was an expansion of the child tax credit, which distributed payments of $3,600 per child under age 6 and $3,000 for kids between 6 and 17 for one year.

Those payments will arrive in the form of $300 checks each month, and the distribution of them is starting to begin in July, the commissioner of the IRS told Congress earlier this month.

Now, there’s a push to make that expanded tax credit for children permanent, with a new bill in Congress.

According to Business Insider, three Democratic members of Congress have introduced a bill to make the $300 monthly checks permanent. The sponsors of the bill include Rep. Rosa DeLauro of Connecticut, who is the chair of the House Appropriations Committee, Rep. Suzan DelBene of Washington, and Rep. Richie Torres of New York.

The Legislation was first introduced in February, before the American Rescue Plan passed, and is now being pushed again. President Biden’s American Family Plan, which the president is expected to talk up in a speech before Congress later this week, will likely propose extending the payments to 2025, as opposed to permanently.

“The coronavirus has exposed serious inequities which have always existed, particularly as it relates to communities of color, and we have a real opportunity here to build the architecture for the future and use this as a moment to address these inequities and lift children out of poverty,” Congresswoman DeLauro said in a statement, at the time when the legislation was first proposed.

“The inclusion of an expansion and improvement of the Child Tax Credit in coronavirus rescue legislation moving in the House this week is groundbreaking, but we cannot stop there. We must use this moment to pass the American Family Act and permanently expand and improve the child tax credit by increasing the benefit to families and providing payments monthly. Children and families must be able to count on this benefit long after the end of this pandemic.”

Will the permanent checks end up on the final bill? That’s unclear. Per the Business Insider account, Biden told the Congressional Hispanic Caucus after a meeting last month that he would love to make the checks permanent, but that he didn’t think he could get such legislation through the Senate.

"I can see some in the White House raise concerns about cost when you're trying to package a lot of things together in the American Families Plan," a House Democratic aide told the website.

"[Permanence] is more costly than a five-year extension, but child poverty costs this country $1.1 trillion a year.”