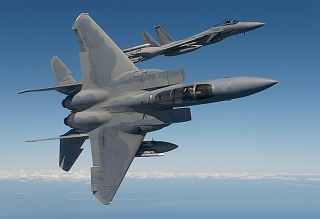 Here's What You Need To Remember: Boeing's F-15QA, the most advanced version of the F-15 Eagle, is a modern take on an old design.

The most advanced version of the F-15 Eagle fighter has flown for the first time.

On April 14, 2020, the first F-15QA took off from Lambert International Airport in St. Louis, where Boeing workers build the iconic, twin-engine fighter.

The F-15QA is a variant of the F-15E, which itself is a two-seat, multi-role version of the basic F-15 air-superiority fighter.

Qatar in 2017 ordered 36 F-15QAs at a cost of $6 billion. The F-15QAs are part of an ambitious plan on the part of oil-rich Qatar to expand and modernize its air force.

“We are very proud of this accomplishment and looking forward with great excitement to the continued successes of this program,” Col. Ahmed Al Mansoori, commander of Qatar’s F-15 wing, said in a Boeing release. “This successful first flight is an important milestone that brings our squadrons one step closer to flying this incredible aircraft over the skies of Qatar.”

Where before the Qatari air force operated just 12 1990s-vintage Mirage 2000s, today the Middle East air arm is acquiring not just the 36 F-15QAs, but also 36 Dassault Rafales and 24 Eurofighter Typhoons.

In short, Qatar is buying new fighters from each of the major Western builders. This unusual strategy allows the kingdom quickly to expand while also giving it a wide range of capabilities. On the downside, it could prove expensive to maintain three disparate fighter fleets.

This new version of the supersonic F-15 also boasts additional weapons hardpoints, allowing it to carry as many as 16 air-to-air missiles, albeit with a huge range and speed penalty.

“The advanced F-15QA not only offers game-changing capabilities but is also built using advanced manufacturing processes which make the jet more efficient to manufacture. In the field, the F-15 costs half the cost per flight hour of similar fighter aircraft and delivers far more payload at far greater ranges,” Prat Kumar, a Boeing vice president and the company’s F-15 program manager, said in a statement.

Congress approved eight F-15EXs in the defense budget for 2020 for a total cost of around a billion dollars, including some spare parts.

The American air arm wants the F-15EXs to conduct peacetime air patrols over the United States, a mission for which the type’s lack of radar-stealth shouldn’t be a serious liability.

During wartime, the F-15EX could launch long-range hypersonic missiles and also function as a control aircraft for formations of armed, fighter-style drones.

This article has been published before and is being reprinted due to viewer interest.