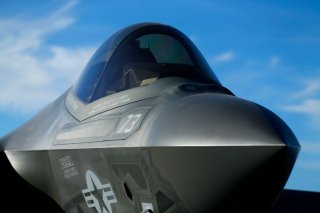 Here's What You Need to Remember: “The successful test is the latest step in giving carrier-based fighters longer legs than ever before, allowing them to fly and fight while keeping the aircraft carrier safely out of range of enemy weapons,” Popular Mechanics said of the maneuver.

The word “drone” means many different things to different people. The small flying toys that one plays with are drones. So are the Predator drones that are used in foreign airstrikes.

Now, the military has another use for drones: refueling strike fighters.

According to Popular Mechanics, history was made earlier this month, when the  U.S. Navy’s MQ-25A Stingray refueling tanker conducted the first successful refueling of an F-35C strike fighter. The refueling took place near the MidAmerica St. Louis Airport in Mascoutah, Illinois.

“The successful test is the latest step in giving carrier-based fighters longer legs than ever before, allowing them to fly and fight while keeping the aircraft carrier safely out of range of enemy weapons,” Popular Mechanics said of the maneuver.

Another report, by Janes, laid out exactly how it happened.

“During the three-hour flight, a USN F-35C pilot from Air Test Wing and Evaluation Squadron Two Three (VX-23) approached the Boeing-owned test asset Stingray, MQ-25 T1, and performed formation evaluations, wake surveys, and drogue tracking. It then plugged with the T1 at 225 kt calibrated airspeed at 10,000 ft altitude.” There were two contacts, with the actual transfer taking place during the second one.

Meanwhile, per Flight Global, Boeing has announced a deal to build a new factory, located at that same airport, to build the MQ-25A Stingray drones. The facility, set to be finished in 2024, will first employ 150 mechanics and support staff.

“The team and state-of-the-art technology we’re bringing to the navy’s MQ-25 programme is unprecedented, and we’re incredibly proud to be expanding both as we build the future of autonomous systems in Illinois,” Kristin Robertson, vice-president and general manager of Autonomous Systems, Boeing Defense, Space & Security, said in a statement.

As I wrote last year about how the MQ-24A Stringray was “one step closer to reality,” following the first successful test. It was seen, at the time as “intended to take over the role of aerial refueling for the Navy, a role currently filled by the Navy’s F/A-18 Super Hornets-turned tankers,” we wrote of the MQ-24A.

“To see T1 [Stingray prototype] fly with the hardware and software that makes MQ-25 an aerial refueler this early in the program is a visible reminder of the capability we’re bringing to the carrier deck,” Dave Bujold, the MQ-25A Stingray program director, said in a statement after that test. “We’re ensuring the ARS and the software operating it will be ready to help MQ-25 extend the range of the carrier air wing.”