NATO Interoperability is Key to Defense of Europe 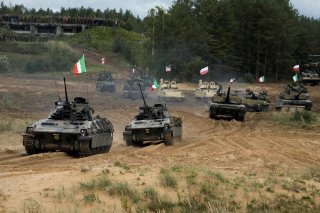 Key Point: Much of this relates to pure quickness and the much-discussed sensor-to-shooter timelines, something U.S. commanders regularly refer to as operating at the speed of relevance.

Should the U.S. suddenly find itself thrust into a massive, full-scale war with Russia across the European continent, Pentagon leaders would likely seek to immediately leverage NATO’s full arsenal of capabilities.

For instance, a Polish F-35 might come across time-sensitive targets such as Russian ships in the Baltic Sea, and instantly send coordinates to a U.S. Navy destroyer operating within range to fire an anti-ship missile. Perhaps that same Polish F-35 is flying with Danish and Norweigian F-35s while controlling forward operating drones from the cockpit, one of which discovers Russian air defenses near the Ukrainian border? Perhaps the allied F-35s, connected by a common data link, are able to quickly send targeting data to U.S. Army ground units armed with Long Range Precision Fires? This is precisely the kind of warfare scenario now being envisioned and pursued by the Pentagon and its NATO allies.

This challenge, which one could say seeks to extend the Pentagon’s multi-service Joint All Domain Command and Control data connectivity program across international boundaries to incorporate NATO allies, is referred to by participants as Mission Partner Environments, a term referring to what could be identified as a defining tactical aim of modern, information-driven warfare.

“What we're aiming to address is the challenges of data fusion, in synchronization across enclaves. So we're looking at the consolidation of redundant mission partner applications and networks and integrating strategic and tactical systems,” Brig. Gen. Jacqueline Brown, Director, Command, Control, Communications, and Cyber, U.S. INDOPACOM, told an audience during a webinar called “Securing Mission Partner Environments Over Untrusted Networks and Infrastructure."

The intent of the effort is to take fast-growing multi-domain connectivity between the U.S. services and extend it to allies. Much of this can be accomplished through the use of AI-enabled, high-speed data processing which can aggregate, analyze and integrate otherwise disparate pools of information.

“We have a lot of sources of information out there to help us understand the operating environment, but frankly, a lot of this information is still piped in and it is difficult to share,” Air Force Brig. Gen Jeffrey Valenzia, Director, Joint Force Integration, Deputy Chief of Staff for Strategy, Integration, and Requirements, said at the webinar.

Much of this relates to pure quickness and the much-discussed sensor-to-shooter timelines, something U.S. commanders regularly refer to as operating at the speed of relevance, a Raytheon scientist on the panel said.

“Raytheon has to consider, from endpoint to endpoint, the latencies that are built into the system and allowable, so you may have to make decisions very quickly. If you have low latency, it can be difficult to do in a high-security environment, because generally adding security to data as it flows actually adds latency,” said Ed Conklin, Technology Director, Raytheon Intelligence & Space, Advanced Concepts and Technology.

A key technique to reducing latency, Conklin described, is finding the technical means to coordinate otherwise separated nodes to one another to streamline the right data to the right location at the right time.

“The golden egg is figuring out the entire system, or ecosystem implemented within the Mission Partner Environment that meets all of the latency requirements of the various levels of data. That is the challenge Raytheon is taking on,” Conklin said.