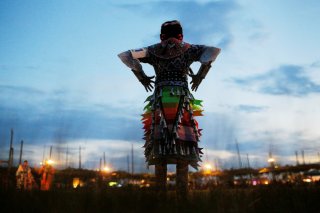 Sunny Dooley’s first brush with the atomic bomb came from her father.

When she was in seventh grade, her teacher asked her what she wanted to be when she grew up. Dooley, a Navajo Diné storyteller who lives in Chi Chil Tah, a small community nestled between oak-covered hills twenty miles south of Gallup, New Mexico, thought she might become an astronaut.

When she told her parents later that day, her father flatly said no.

“I asked why,” Dooley recalled in an interview with the nuclear policy podcast, Press The Button. “And he said, ‘Because if you’re going to be an astronaut, you have to use very powerful energy to get up into the Moon and beyond into the stars. And that kind of energy, we’re not supposed to utilize that. It’s not meant for you.’”

Centuries ago, her father told her, before the arrival of the Spanish, the Navajo Diné had established the tradition of hozho, a way of life that sought to root people in the natural balance of the world. Central to this concept was the idea that they “would not try to manipulate energy forces that were more powerful than us,” Dooley explained. They backed this pledge with a sworn covenant in Chaco Canyon, a prehistoric settlement sacred to the Navajo.

That all changed when the United States detonated the world’s first atomic bomb on July 16, 1945 in the New Mexico desert. That morning, the Trinity device exploded with the force of over twenty thousand tons of TNT, generating a flash that could be seen for hundreds of miles and a mushroom cloud that stretched forty thousand feet into the sky.

Dooley’s father saw the light from the explosion along with countless other Navajo who lived within the radius of the atomic glare. Almost immediately, he told his daughter, local elders “knew that something catastrophic had happened.” Most concerning were reports that a stone symbolizing the ancient hozho covenant had fallen from its perch in Chaco Canyon. With such great energies unleashed, Dooley explained, the compact had seemingly been broken.

For many, that morning marked the end of a kind of innocence. “My father said that all of the medicine men were very sad and many of them cried,” Dooley recounted. “They knew that the world had changed forever.”

They were right in ways they could not have predicted. Navajo lands were found to be rich in uranium deposits, a resource Washington was keen to exploit as the Cold War geared up and the nuclear arms race began in earnest. Government contractors carved out hundreds of mines in New Mexico alone, carting away millions of tons of the radioactive ore between 1944 and 1986.

It was the Navajo who bore the brunt of this frenzied excavation. Skimpy safety regulations led to widespread uranium contamination as Navajo communities bathed in water flushed from mines and even built houses out of irradiated material. The greatest single tragedy occurred in 1979, when a dam used by a uranium mill collapsed near Church Rock, New Mexico, releasing 94 million gallons of nuclear waste into the Puerco River and causing the third-worst radioactive disaster in history behind only Chernobyl and Fukushima.

As a direct result, cancer and kidney failure have become endemic among the Diné. Even now, studies show that the Navajo have significantly more uranium in their bodies than almost any other population in the United States, much of it from water still contaminated by mining activity decades after the last mine was shut down. Dooley herself doesn’t have access to uranium-free water; she has to ride into town to get what she needs to survive.

Hers isn’t a unique condition. “All of these places, to this day, are inhabited,” she explained. “Whatever waste that’s produced from those mines is coming down the streams and the springs and the watersheds. It’s going into the Colorado River, which produces most of the water for Arizona, Nevada, and California. And so, this isn’t isolated contamination in just one little area. It’s vast.”

Over the past decade, the US Justice Department and the EPA have begun to enter into settlements with affected communities to reduce radiation risks, including assessment and cleanup activities at 219 of 523 abandoned uranium mines. And while this is just the beginning of a healing process, Dooley has hope that the story of her people and their Cold War sacrifice will continue to be heard.

“That story is more relevant today because we’re now finally able to speak English, to express our worldview of what has happened to us,” she said. “Because many times, it was a non-Navajo speaking for us before.”

“Who knows what got lost in that translation?”

The entire interview with Navajo Diné storyteller Sunny Dooley is available here on Press The Button.