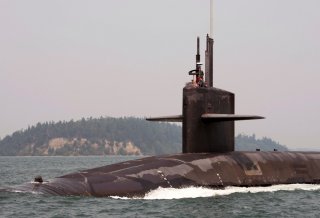 Here's What You Need to Know: Passive systems are used to essentially track or “listen” for acoustic pings to identify enemy movements. This can help conceal a submarine’s position by not emitting a signal, yet can lack the specificity of an “active” sonar system which sends an acoustic “ping” forward.

The Navy’s future attack submarines will be bigger, faster, more autonomous, networked and stealthier than the existing Virginia-class attack boats because greater size will allow for more advanced quieting technologies to be built into the boats.

Slated to emerge in the 2030s, a new SSN(X) class of attack submarines may be closer in size to the Navy’s much larger new Columbia-class of nuclear-armed ballistic missile submarines, according to quotes from BWXT CEO Rex Geveden cited in a report from the U.S. Naval Institute.

“A wider hull for submarines can improve characteristics like stealth, allowing ship designers to build in more sound-deadening technology and allow room to develop systems to increase a boat’s speed, but it is more expensive to build,” the USNI report states.

Yet another area of innovation likely to figure prominently in the development of a new generation of attack submarines is “Fly-by-Wire” navigational controls such as those built into the Virginia class Block III boats; instead of using mechanically operated hydraulic controls, the Fly-by-Wire system uses a joystick, digital moving maps and various adaptations of computer automation to navigate the boat. This means that computer systems can control the depth and speed of the submarine, while a human remains in a command and control role.

A 2005 Naval War College Review essay cites Virginia-class submarines as a platform benefiting from a modular, or “open architecture” approach. Since its inception, the Virginia-class was built with a mind to prepare for future upgrades, as evidenced in the essay.

The Naval War College Review essay, interestingly, aligns with Navy program managers’ comments about the need to engineer for future technologies to permit quick integration of new systems. The essay describes it as “yet-unenvisioned equipment to be installed to counter unimagined threats, and an insistence that core enabling characteristics such as stealth never be compromised.”

“From essentially a ‘lone wolf’ a decade ago, the submarine is now nearly universally accepted as a key node within network-centric warfare, the purveyor of “undersea dominance,” and an essential element of Sea Power 21 (a previously articulated Navy attack vision emphasizing information dominance),” the 2005 Naval War College Review essay writes.

With this essay in mind, there is substantial precedent for this kind of modular approach, looking at the multi-year trajectory of Virginia-class development; each Block has incorporated several impactful new technologies not yet present when the previous boats were built. For example, unlike Blocks I and II, Virginia-class Block III boats significantly increase firepower with the introduction of what’s called Virginia Payload Tubes adding new missile tubes able to fire six Tomahawks each. Block III also includes a new Large Aperture Bow “horseshoe-shaped” sonar, which switches from an “air-backed’ spherical sonar to a “water-backed” array, making it easier to maintain pressure, according to a 2014 report in “NavSource Online.”

The LAB sonar, which is both more precise and longer range than its predecessor, also advances the curve in that it introduces both a passive and “active” sonar system. Passive systems are used to essentially track or “listen” for acoustic pings to identify enemy movements. This can help conceal a submarine’s position by not emitting a signal, yet can lack the specificity of an “active” sonar system which sends an acoustic “ping” forward. The submarine’s technology then analyzes the return signal to deliver a “rendering” of an enemy object to include its contours, speed and distance. In concept, sonar works similar to radar except that it sends acoustic signals instead of electronic ones.