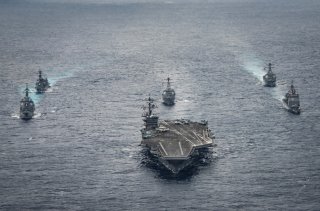 Here's What You Need to Remember: The Navy hopes to begin fielding a megawatt-class laser in the 2025 timeframe.

A source last year provided to Tyler Rogoway, editor of The War Zone, a photo of the Arleigh Burke-class destroyer USS Dewey at the naval base in San Diego. In the photo, Dewey appears to sport a new laser weapon on its forward deck.