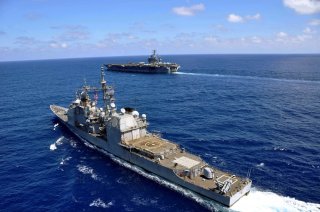 Here's What You Need to Remember: What type of fleet the U.S. Navy and its fellow services field may vary from theater to theater and contingency to contingency—and should. Carrier battle groups might remain the primary implements for waging, say, expeditions off the northern coast of Norway or Russia, where land-based weaponry is sparse. Seagoing forces stand mainly alone.

Is the “ship” still the arbiter—and the proper unit of measurement—of naval power? Perhaps not. Maybe fleet designers need to shatter their fealty to tradition and do something altogether new to win future high-seas wars. They may need to fashion a new U.S. Navy “fleet” that incorporates ships alongside such not-strictly-naval implements as unmanned vehicles prowling sea and sky, U.S. Air Force bombers unleashing anti-ship missiles or minefields, or even U.S. Army rocketeers equipped to pummel enemy ships and warbirds. Artfully constituted, this hybrid fleet will bring to bear any asset able to shape events at sea.

And so it should. When tabulating naval power, estimate strength relative to opponents; don’t count up widgets except insofar as they buttress strength.

Such ships as help make up this new-age fleet may look drastically different from traditional men-of-war. They could be winsome diesel-electric submarines of a sort the U.S. Navy hasn’t operated in decades. Converted merchantmen or even superempowered fishing craft could act as fighting ships. Vessels could be manufactured at foreign yards or leased from foreign navies or commercial fleets. Imagination must roam free when you need lots of platforms in a hurry, and on the cheap, to haul ordnance to scenes of battle and deposit it on target.

This wouldn’t be the first time some mix of gee-whiz technology and novel warmaking methods turned the world upside down. According to maritime historian Julian S. Corbett a “revolution beyond all previous experience” upended fleet design more than a century ago, when the sea mine, torpedo, and submarine debuted—rendering hulking battleships and cruisers suddenly vulnerable. The aircraft carrier eclipsed the battleship during World War II. The nuclear-powered submarine has arguably eclipsed the carrier since the Cold War.

And on the rhythm of naval history goes. No ship type rules the waves forever.

That being the case, it may be possible to wring decisive combat power out of the current U.S. Navy fleet of 280-odd ships without building up to 355 hulls, the figure Congress wrote into law to help the navy cope with this age of great-power competition against the likes of China and Russia. Whether such a feat is possible is one question among many tackled by last week’s “Breaking the Mold 2.0” workshop in Newport. My boss, Rear Adm. Jeff Harley, charged the gathering with devising “novel and radical” ideas to break the “mold” manifest in orthodox thinking.

Ship types have displaced one another other from the cores of fleets across the decades and centuries. Maybe it’s time to unseat the ship itself. That would fulfill Admiral Harley’s mandate on behalf of radicalism.

Whence comes orthodoxy? It stems in part from human nature, as transcribed into institutional and even national culture. Philosophers warn that the timber of humanity primes us to project past trends into the future, assuming that past performance guarantees future results. Breaking the mold is hard absent some cataclysm that breaks it for us. The carrier and its complement of fighter and attack planes existed at the outbreak of war in 1941 thanks to naval visionaries. Yet it still took the Japanese raid on Pearl Harbor to jolt U.S. naval potentates out of their battleship-centric worldview.

Bureaucracy is like a machine. It exists to perform a repertoire of routine functions over and over again, the same way every time. This is its blessing and its curse. It handles mundane tasks with efficiency, yet it prejudges the answers to important questions. When the time comes to retire a ship or aircraft type, the bureaucratic machinery tends to replace it with an improved version of the old—a new ship or aircraft that executes the same basic missions with better sensors and armaments. Lawmakers and the electorate reinforce this mass-production mindset. Try explaining to Congress or the American people that the U.S. Navy need not be made up of ships!

The workshop organizers saw tapping outsiders and youthful voices as one way to smash the mold of conventional maritime thought. Three-quarters of the Breaking the Mold attendees were new to the series, which got its start last March. A third of them held the rank of O-5 or below, meaning they were U.S. Navy commanders or below or their equivalents from the Marine Corps, Army, and Air Force. A handful of whippersnapper civilian officials also took part. This was no colloquium for gray-haired eminences. Not entirely, at any rate.

One imagines mixing youth with age would have set Theodore Roosevelt’s heart aglow. After all, this was someone who empowered youth and moxie. When junior officer Lieutenant W. S. Sims saw his proposals for improving the dismal state of U.S. Navy gunfire control rebuffed by senior leadership, he wrote directly to President Roosevelt—and the president put him in charge of target practice for the whole navy. TR steamed to Newport late in his presidency to preside over a conference designed to break the mold in battleship design, then the state of the art in naval technology. The “Battleship Conference” gave junior to mid-career officers a voice vis-à-vis the highest authority.

And TR seemed sincere about affording youngsters their say. Late in 1908 the president informed Congress that “wise radicalism and wise conservatism go hand in hand, one bent on progress, the other bent on seeing that no change is made unless in the right direction.” At the time Roosevelt was musing about social and industrial conditions that demanded progressive reform, not about naval or military affairs. Still, his formula—mold-breakers push for change while conservatives try to preserve what exists and works—bolsters the likelihood of productive debate.

Including debates about maritime strategy, doctrine, and force design. Wise radicals formulate wacky-sounding hypotheses. Wise conservatives object that all such hypotheses must undergo the test of reality before the establishment endorses them. Naysayers demand proof, insisting—rightly—that to leap without looking courts disaster.

In theory, then, the push-and-pull interplay between radicalism and conservatism should beget an experimental ethos within the sea services. Young Turks in the ranks might decry gauging naval power by the number of ships in the inventory. That’s oldthink, they might say. Ripostes from the old guard would accent the perils and downsides of decoupling force design from time-tested methods. Rigor in field trials would be oldtimers’ watchword. Insurgents would hit the gas on change, traditionalists the brakes. The scientific method would help the U.S. Navy identify and avoid dead ends and stay moored in reality while also embracing ideas that prove their worth.

Grandmaster Carl von Clausewitz would nod knowingly at this debate. “The best strategy,” proclaims the Prussian sage, “is always to be very strong; first in general, and then at the decisive point. Apart from the effort needed to create military strength, which does not always emanate from the general, there is no higher and simpler law of strategy than that of keeping one’s forces concentrated. No force should ever be detached from the main body unless the need is definite and urgent.”

Ground warfare between contiguous nineteenth-century European states constituted Clausewitz’s frame of reference. He was a veteran of the Napoleonic Wars, with their massed formations of infantrymen, cavalry, and artillerymen. Yet he refuses to be held captive by his times. He declines to designate specific army formations or weaponry as universal repositories of combat power. The point of strategy, maintains Clausewitz, is to concentrate superior firepower at the decisive place on the map at the decisive time in order to overcome the foe. To be stronger when and where it matters, in other words, while abjuring lesser commitments that attenuate battle strength.

The Prussian master declines to specify what form strength should take. It seems the delivery system for firepower represents a secondary matter for him.

Clausewitz paid waterborne combat next to no attention, but he would doubtless project his principles seaward if asked. He would exhort U.S. naval officialdom to amass superior strength, making itself more powerful on the whole than likely antagonists. And he would urge strategists to study where likely hotspots lie on the nautical chart and to devise forces to make America the dominant contender there. There is no preordained determinant of high-seas battle power.

What type of fleet the U.S. Navy and its fellow services field may vary from theater to theater and contingency to contingency—and should. Carrier battle groups might remain the primary implements for waging, say, expeditions off the northern coast of Norway or Russia, where land-based weaponry is sparse. Seagoing forces stand mainly alone. Light surface combatants, conventional submarines, minelayers, and missile-armed ground forces might be the instruments of choice for slamming shut the first island chain to Chinese shipping and aircraft. Nuclear-powered attack subs might play the dominant part in Eastern Mediterranean or South China Sea imbroglios. U.S. Coast Guard cutters might spearhead operations in Arctic climes.