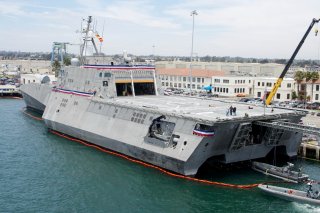 Here's What You Need to Remember: Arming destroyers and the Littoral Combat Ship with more lethal, precise and longer-range weapons can easily be interpreted as being part of the Navy’s larger “distributed lethality” strategy which first emerged in 2015 as part of an effort to massively arm the surface fleet.

The Navy is testing a new combat system for its Littoral Combat Ship to qualify it for military missions via a larger-than-normal number of upcoming live-fire exercises, which will prepare the ship for major maritime warfare. The system will better integrate, streamline and improve weapons on board the ship.

Part of the effort includes an introduction of new government-furnished equipment likely intended to improve fire-control, targeting and integration across a group of ship-board weapons systems. These weapons include an over-the-horizon Naval Strike Missile, a close-in weapon system (CIWS) for near-in threats, and mid-range defensive interceptors such as SeaRAM and Rolling Airframe Missile. Over the course of many years of development,  the SeaRAM missile has engaged and destroyed an aerial drone, Navy officials said. This was the first shipboard firing of the new weapon, which emerged from extensive planning, assessment, modeling and simulation, Navy officials said.

Kipp said the Combat Systems Qualification for LCS 19, the USS St. Louis, was recently completed by firing a remote-controlled aerial targeting with SeaRAM and only the second “full-up-display” of SeaRAM detecting and engaging from aboard the Freedom-variant of the LCS.  These weapons enhancements are intended to help establish the technological infrastructure sufficient for massive LCS “survivability and lethality upgrades” planned for 2023, Kipp said.

The ship-launched CIWS uses a Phalanx gun capable of firing forty-five hundred small projectiles per minute to blanket an area; the SeaRAM replaces the gun with larger, longer-range Rolling Airframe Missiles. Unlike the CIWS, it uses a twenty-millimeter cannon to shoot down threats close to a ship. SeaRAM fires a Rolling Airframe Missile (RAM) from an 11-missile battery, Raytheon officials explained.

The Rolling Airframe Missile is what defense experts call a “fire and forget” missile, meaning it uses an RF or radiofrequency detection technology along with a heat-seeking infrared sensor to find its way toward an approaching threat in order to intercept and destroy it.

Navy destroyers would likely use a Standard Missile-3, also known as an SM-3, to defend against an attacking long-range ballistic missile threat flying through space toward a target. Medium-range anti-ship missiles or sea-skimming enemy rockets could be destroyed by an SM-2 or SM-6 interceptor. Threats a bit closer could be taken out by an Evolved Sea Sparrow Missile (ESSM) or SeaRAM before a Close-In-Weapons-System strikes down approaching fire.

Arming destroyers and the Littoral Combat Ship with more lethal, precise and longer-range weapons can easily be interpreted as being part of the Navy’s larger “distributed lethality” strategy which first emerged in 2015 as part of an effort to massively arm the surface fleet. Since that time, the strategy has evolved and migrated into what the service calls “Distributed Maritime Operation,” a term which perhaps indicates that newer networking, artificial-intelligence-enabled computing and cross-domain operations are inspiring the Navy to migrate or further develop its surface warfare strategy.

Broadly speaking, the idea is to help the Navy return more fully to a focus on “blue water” combat against potential “near-peer” adversaries following a decade of ground wars wherein the Navy expended more effort on things like counter-piracy, Visit Board Search and Seizure and counterterrorism.