No Oil for You: Iran’s Submarines Could Easily Control the Strait of Hormuz 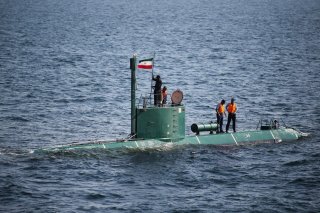 Here's What You Need to Remember: Iran reportedly received four Yugo-class submarines from North Korea. It is admittedly a rather aged design, but—as long as the sub remains motionless and the crew still—it may be undetectable.

Iran’s smaller submarines are not much to talk about on paper, especially when compared to their more powerful nuclear counterparts. But in the Persian Gulf region, they are ideal. The Gulf is shallower and narrower than the open ocean, which favors smaller submarines.

It is also a navigator’s nightmare—it is filled with various underwater obstacles including gas platforms and underwater pipes, in addition to territorial boundaries. Iran has no use for nuclear-powered submarines either—the small diesel-electric submarines it operates can lie in wait with their engines off. They would be very hard to detect and could stay hidden, ambushing unsuspecting convoys.

This submarine is somewhat more limited in capabilities, but could perform well in a mine-laying function or for clandestine infiltration/sabotage operations. Due to its relatively new design, it is likely one Iran’s quieter submarines—ideal for ambushing unsuspecting ships.

The Ghadir-class is one of Iran’s smaller submarines and is domestically-produced. They are quite small, and have an overall length of just 29 meters, or about 95 feet, and a probable crew compliment of about eighteen.

The Ghadir-class was originally launched in 2007 and is ideal for maneuvering in Iran’s shallow coastal waters. Though it could be designated a midget submarine, the Ghadir may be better classified as a coastal or littoral submarine. According to the Office of Naval Intelligence, Iran operates fourteen to twenty-three Ghadir-class submarines.

The Ghadir-class does have two 533 millimeter heavyweight torpedo tubes. These tubes can also be used to fire cruise missiles. This design quirk is intentional, as the Ghadir-class is not tall enough to launch larger cruise missiles vertically. Launching missiles and torpedoes from torpedo tubes is also simpler and cheaper from a design perspective.

It has been suggested that the Ghadir-class shares some similarities to the Yono-class, implying a link between Iranian and North Korean submarines. While this is likely true, the level of technological submarine cooperation between the two countries is hard to gauge.

Still, the Ghadir-class’ small size would likely be useful in the crowded Arabian Gulf.

Iran reportedly received four Yugo-class submarines from North Korea. The class is also quite small, only 65-72 feet and has an even smaller crew complement of just two, though there is space onboard for special operations crew members.

It also has two torpedo tubes that can fire 533 millimeter torpedos. It is admittedly a rather aged design, but—as long as the sub remains motionless and the crew still—it may be undetectable.

In Favor of Defense

The unique navigational features of the Arabian Gulf and the Strait of Hormuz favor an attacker. National boundaries must be respected by ships traversing these waters, and a crowded environment of various shipping vessels mean that surface vessels sail along predictable routes.

In these shallow waters, heavyweight nuclear submarines lose their advantage to small diesel-electric subs—which Iran has in numbers. Iran’s small subs are no joke.