No, the United States Is Not Getting Israel’s Iron Dome System 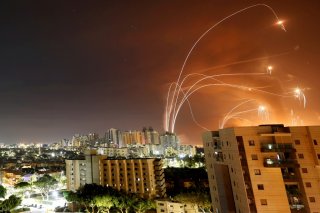 Here's What You Need To Remember: Despite seeming to have confidence in the platform, in March the U.S. Army announced it would reconsider the plans to buy additional Iron Dome systems due to the fact that the platform could not be integrated into American-made air defenses due to Israel’s reluctance to share the system’s source code.

Israel’s Iron Dome has been seen as one of the world’s most powerful and effective air defense systems, and since 2011 it has been quite successful in protecting the inhabitants of the Middle Eastern nation from rocket and artillery attacks. Comprised of mobile launchers that are networked together to form batteries that can each protect an urban area of up to 93 square miles, the Iron Dome has a proven track record of destroying between 80 to 90 percent of its targets. The air defense system was most recently in the spotlight during May’s missile attacks that were launched by Hamas from the Gaza Strip.

But even after what was the best demonstration of the system that one could hope to have, the U.S. Army this week opted to go in another direction for its own defense systems. After conducting its first domestic tests of the aerial missile defense system, the U.S. Department of Defense (DoD) has instead opted for a system developed by Leidos-owned Dynetics to build prototypes for its enduring system that can counter both drone and cruise missile threats, DefenseNews reported.

The U.S. Army made its decision after the service conducted a “shoot-off” between the Dynetics system and the one built by Raytheon Technologies and Israeli-based Rafael team. The comparative tests were held in New Mexico last month.

The latter two companies had offered up Rafael’s Iron Dome launcher and Tamir interceptor, also known as SkyHunter in the United States. It competed with the Huntsville, Alabama-based Dynetics, which developed a system based off the Army’s internally-developed—but canceled Multi-Mission Launcher. In a way, Raytheon still comes out as a partial winner, as the Dynetics platform used the Raytheon-produced AIM-9X Sidewinder interceptor.

Under a previous agreement from 2019, Israel had sold a pair of Iron Dome batteries to the United States, with the first being delivered in 2020 and the second in January of this year for a total cost of $373 million. Despite seeming to have confidence in the platform, in March the U.S. Army announced it would reconsider the plans to buy additional Iron Dome systems due to the fact that the platform could not be integrated into American-made air defenses due to Israel’s reluctance to share the system’s source code.

“We believe we cannot integrate them into our air-defense system based upon some interoperability challenges, some cyber[security] challenges and some other challenges,” U.S. General Mike Murray, commander of Army Futures Command, said at the time.

However, the United States has still supported the development of Israel’s Iron Dome and has contributed around $1.6 billion in funding for the air defense platform since 2011. The American-based Raytheon also remains a committed partner with Rafael in the production of the subsystem parts for the Iron Dome. Those components are currently produced throughout fifteen states in the United States.

“The administration is committed to ensuring that Iron Dome can defend Israeli civilian population centers targeted by terrorist attacks,” Austin said, and added that the Iron Dome “is going to save more innocent lives.”