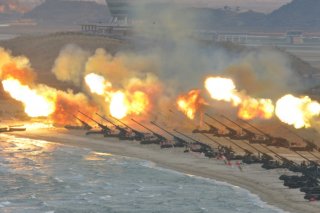 Here's What You Need to Remember: A North Korean artillery barrage could inflict as many as 250,000 casualties in Seoul alone, RAND reported, citing a U.S. Defense Department estimate.

David Axe served as Defense Editor of the National Interest. He is the author of the graphic novels  War Fix, War Is Boring and Machete Squad. This article first appeared last year and is being republished due to reader interest.