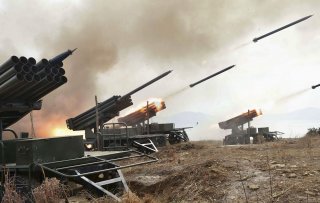 Here's What You Need to Remember: Much of Pyongyang’s artillery is in range of the Seoul Greater Metropolitan Area, which begins just 25 miles south of the Demilitarized Zone separating the two Koreas. Some 10 million people live in the Greater Seoul Metropolitan Area and another 15 million reside just outside of the metropolitan area.

Years back, North Korea on May 4, 2019 test-fired a short-range ballistic missile -- its first major launch in the 18 months since North Korean leader Kim Jong Un suspended missile testing ahead of a summit with U.S. president Donald Trump.