Not Aircraft Carriers: Japan Is Doubling Down on New Helicopter Carriers 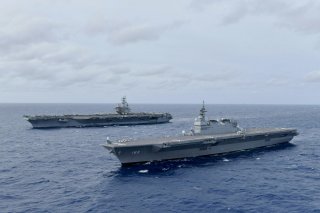 Meet the Izumo—the Japanese Maritime Self Defense Force’s largest ship, displacing a gargantuan twenty-seven thousand tons. The vessel’s lengthy, flat deck measures the length of two-and-a-half football fields at 248-meters. The Izumo typically hosts seven SH-60K helicopters designed to comb the seas for hostile submarines, plus another two search-and-rescue models—though it can carry as many as twenty-eight choppers if necessary. The Izumo also has several elevators to lower the helicopters to an internal hangar deck.

However, the issue will remain emotionally fraught both in Japan and China—which explains why though the concept has clearly been mulled since the Izumo-class was first designed, discussion of the possibility has been veiled by terminology such as ‘helicopter destroyer.’ However, as Japan’s conservative ruling party pursues new records in defense spending to balance China’s expanding naval power, its interest in operating jump jets from carriers seems likely to increasingly go from implicit to explicit.