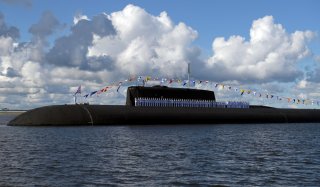 Here's What You Need to Know: The K-266 Oryol is one of three of the “Oscar II” Soviet-era submarines still serving in the Russian Northern Fleet.

In October 2020, the crew of the Russian Navy’s nuclear-powered submarine Oryol (K-266 Orel) took part in an exercise in the Barents and reportedly fired a P700 Granit anti-ship cruise missile from a submerged position. The press office of the Northern Fleet told state media that the missile firing was successful and the crew on the Il-38 anti-submarine warfare (ASW) aircraft confirmed the target had been hit.

“Today, as part of measures to practice planned combat training assignments for the summer training period, the crew of the Northern Fleet’s nuclear-powered missile-carrying underwater cruiser Oryol fired a Granit anti-ship cruise missile against a naval target at the Fleet’s combat training ranges in the Barents Sea,” the press office said in a statement. “The fire was conducted from the submerged position against the target that simulated a notional enemy’s large surface ship. The target was located at a distance of over 120 km from the missile launch site.”

The press office added that the area of the missile firings was closed for shipping and air flights in advance of the launch, and the ships from the Kola Flotilla of the All-Arms Forces sealed off the area during the time of the exercise.

This test firing drill came just a week after the submarine’s crew took part in ASW and mine countermeasures training during another interaction with a nuclear-powered submarine from the Northern Fleet along with minesweepers from the Kola Flotilla.

The K-266 Oryol is one of three of the “Oscar II” (NATO codename for the boats) Soviet-era submarines still serving in the Russian Northern Fleet. All three are reportedly assigned to the 11th Submarine Division, which is berthed at Guba Bolshaya Lopatka on the Kola Peninsula northwest of the Russian city of Severomorsk.

The enormous submarines were designed during the Cold War to hunt American aircraft carriers. Instead of “creeping close” for a torpedo attack, the submarines were developed to lob enormous anti-shipping cruise missiles (ASCMs) from up to hundreds of miles away. These included the P700 Granit, which was developed in the 1970s. While these missiles have been proven to be accurate, in December 2015 one of the missiles went off course and struck an apartment building after being launched from a test site near Severodvinsk.

The third-generation nuclear-powered sub was laid down on January 19, 1989 at the Sevmash Shipyard in Russia’s northwest at factory number 650 and put on the list of Soviet Navy warships in January 1990. Originally named Severodvinsk, the submarine was floated out in May 1992 and made operational that December. When the Russian Navy’s flag was raised on the submarine in January 1993 she was officially named for the city of Oryol (Orel)—which earned the distinction of being among the forty five cities named “City of Military Glory” for “courage, endurance and mass heroism, exhibited by defenders of the city in the struggle for the freedom and independence of the Motherland” during the Second World War.

The submarine suffered minor damage during a fire in April 2015, which was caused by insulation materials catching fire during repairs. The Oryol underwent its first modernization as part of the Russian Navy’s Project 949AM in 2017.