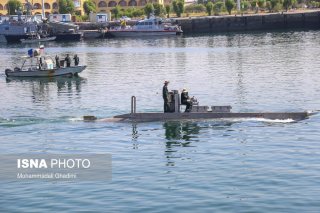 Iran just released images of some new naval equipment—including an odd-looking submarine that just might be unmanned.

The Islamic Republic News Agency’s English-language segment just released a set of photos showing what appears to be new Iranian naval equipment. The photos, released on Thursday, appear to show several types of fast boats that Iran favors in the Strait of Hormuz and the Persian Gulf, as well as a rather odd assortment of submarines or semi-submersibles.

As the naval expert H. I. Sutton pointed out, the largest of these looks like either a pretty small manned submarine, or a decent-sized Unmanned Underwater Vehicle (UUV). If this submersible is indeed an UUV, it would put Iran into an exclusive group of countries.

One of the indicators that points to unmanned operations is the lack of a visible opening through which people could enter the hull through. The sub’s small size is further evidence of the submersible’s unmanned intent. The lawn chair the forward sailor is sitting in in the photo likely wouldn’t stay deck-side during operations, nor would the joystick controller he used, presumably to steer the submarine.

In terms of sophistication (and price, probably), the United States Navy and the Royal Navy are likely leading the pack in UUV development. The Royal Navy’s Extra Large Unmanned Underwater Vehicle, or XLUUV ‘Manta’ as it is also known, is quite sophisticated—it can dive over 300 meters below the ocean surface and has a 48 hour endurance. Propulsion is likely provided by either a diesel-electric or air-independent propulsion system. The odd double pipe at the UUV’s rear is likely an exhaust pipe, strongly indicating a diesel-electric propulsion system.

Iran’s little UUV, if it is indeed an UUV, has a much more home-made DIY appearance—probably because it is. The craft’s four-angled bow seems rather akin to something built in a garage, rather than at a naval shipyard. This is probably accurate too. Iran’s domestic production capability is rather poor, especially for complex weapon systems.

Though not exactly an upgrade in terms of Iran’s naval capabilities, the likely unmanned nature of their newest sub points to one of Iran’s most important strengths: in the Strait of Hormuz and the Persian Gulf Iran doesn’t have to be prepared to win a conflict, it just has to have enough leverage to hinder traffic and make more powerful, more sophisticated opponents take pause.

The likely-UUV does just that—it could never go head-to-head with the United States Navy, but it could give a surface group pause—just enough of a threat to hinder operations and slow down their potential adversaries. Beware the homemade ships of Iranian origin.