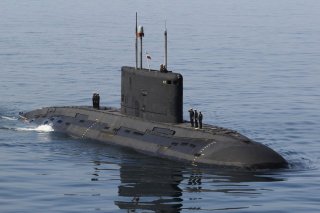 In 2018, Iran informed the U.N.’s nuclear watchdog, the International Atomic Energy Agency (IAEA) that it was planning to “construct naval nuclear propulsion in the future.”

But could Iran feasibly manufacture a nuclear submarine?

The history of nuclear underwater propulsion began sixty-five years ago. In 1955 with the USS Nautilus. The Nautilus was an American submarine, and the world’s first nuclear submarine. Nuclear submarines totally changed the face of both naval warfare writ large and underwater warfare, specifically.

Nuclear submarines, naturally, do not have to refuel—at least not even as close to as often as diesel-electric submarines, which are dependent on a carbon-based fuel source.

To this day only a handful of countries are in the nuclear submarine club—the United States, Russia, China, France, Britain, and India (although it should be pointed out that the Indian nuclear submarines are on lease from Russia, with the option of purchase after the lease is up).

Could Iran actually join the ranks of the nuclear sub club? There are several problems. First, regardless of the nuclear question, is Iran’s domestic manufacturing capabilities.

Iranian weapons programs draw heavily on foreign tech, despite being vaunted as “domestically manufactured.” Look at the Karrar tank—which Iran says it is 100 percent Iranian built. A closer look reveals it is likely a T-72 or T-90 hull with some new components, maybe a new turret. Or look at their supposedly domestically-produced light attack jets. Those planes are just refurbished American technology—airframes likely from the 1960s!

Questions of feasibility aside, Iran’s anti-access/area-denial strategy relies on using cheap, easy to produce, plentiful weapons against a much more technologically advanced enemy. At sea, this likely means the United States Navy. Against American aircraft carriers and destroyers, Iran doesn’t need an expensive, hard to maintain nuclear powered submarine—it needs seamines, and lots of them. Which it already has.

If—and this is a long if—Iran could somehow get its hands on the proper technology, it would almost certainly not be domestically manufactured, but rather draw on the expertise of other countries, in much the same way that Brazil or Turkey has done or intends to do.

The naval expert H. I. Sutton explained that Brazil’s stated nuclear ambitions would require help from France, already a nuclear sub club member. Meanwhile, Turkey’s nuclear ambitions rely heavily on German help. Therefore, Iran would likely beg, borrow, or steal tech from another country to have any chance of a viable nuclear sub.

Be they remote-control “stealthy” jet fighters or mock-ups of American Trimaran ship designs, Iran has a long history of bombastic announcements and is not likely to produce a nuclear powered submarine anytime in the near future.