Oh You Need to Study This Picture. The U.S. Military Wants to Kill Drones. 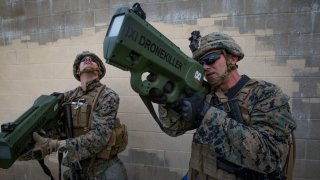 Here's What You Need to Remember: The Air Force and the other services such as the Army are now improving existing drone defense weapons and moving quickly to deploy new ones, such as interceptor missiles, networked ground sensors, laser weapons and electronic warfare, among other things.