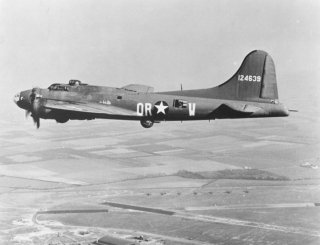 Here's What You Need to Remember: Operation Aphrodite was unsuccessful. A total of 14 missions were flown against targets in Germany or German-occupied Europe. U-boat pens and V-1 or V-2 assembly and launch sites were targeted, though none of the B-17s reached their destination, with several flying out of control and crashing, or being taken down by German anti-aircraft guns.

Everything was pulled out—seats, ammunition, and bomb storage racks, armor plating, machine guns, everything. This saved an estimated six tons of weight that could be filled with more explosives. The explosive of choice was the British-made Torpex explosive, 50% more powerful than TNT. Torpex is a mixture of TNT, powdered aluminum, and RDX, an early plastic explosive. To fly the huge bombs, remote control equipment was added, and a pair of television cameras were strapped to the cockpit to provide the ground pilot with visual aids while flying.