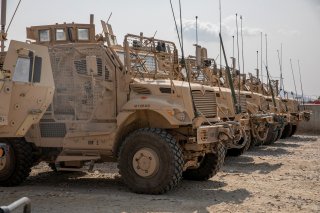 Here's What You Need to Know: Oshkosh is drawing upon the technical standards built into the JLTV to up-gun the vehicle with new missiles, anti-tank weapons and other technologies for heavy combat.

The Army’s Joint-Light-Tactical Vehicle (JLTV) and Mine-Resistant Ambush Protected All-Terrain Vehicle (M-ATV) and a collection of large-wheeled trucks are all well-known, established defense platforms made by Oshkosh Defense, a defense contractor with a long history of innovating, engineering and delivering large combat platforms to the Army.

Oshkosh Defense has a broad and massive reach across the Army vehicle fleet, but its contributions to the military service have primarily been in the realm of tactical-wheeled vehicles. For instance, along with the JLTV and M-ATV, Oshkosh makes the Army’s Family of Medium Tactical (FMTV) Vehicles and the Heavy Expanded Mobility Tactical Truck.

Now, following many years of contract wins and large-scale production of Army and Marine Corps platforms, Oshkosh Defense is expanding into new territory by competing to build and the Army’s armored Optionally Manned Fighting Vehicle (OMFV), which will replace the Bradley Fighting Vehicle. The company is one of five major contractors chosen by the Army to compete for the OMFV. The move breaks ground for Oshkosh because the company has not as of yet delivered to the Army heavier armored and tracked vehicles for mechanized combat.

There are a few interesting nuances to consider which might suggest that Oshkosh’s submission of an armored OMFV may not be as much of a stretch as it appears on the surface. Of course, the company has been continuing to expand in recent years following the success of its JLTV, FMTV and M-ATV tactical vehicles. And while vehicles such as the JLTV and M-ATV have, since their inception, been engineered as tactical platforms, they are rugged vehicles with weapons that allow them to participate in major warfare. These vehicles were designed to survive attacks beyond the well-known efforts to deflect and defend against explosive debris from roadside bombs. They have side panel armor, v-shaped underbellies, blast-attenuated seats and various weapons applications so that they can operate in large-scale combat scenarios facing incoming enemy fire from anti-armor weapons. Also, both the M-ATV and JLTV were built with an “open approach,” meaning they were engineered to accommodate new weapons, sensors, computing technology and communications gear as they emerge.

“There is a big focus within our combat systems upon integrated architecture and an approach to modularity for networks,” Pat Williams, the vice president and general manager of Army & Marine Corps programs for Oshkosh Defense, told the National Interest. “There is a huge focus on that for OMFV.”

Oshkosh is drawing upon the technical standards built into the JLTV to up-gun the vehicle with new missiles, anti-tank weapons and other technologies for heavy combat.

Additionally, off-road mobility brings advantages for major mechanized warfare given that approaching forces might need recon or command and control vehicles to scout enemy areas and uneven terrain by traveling off-road. This is why the M-ATV and JLTV are built with Oshkosh’s well-known TAC-4i suspension system engineered to adjust quickly to new terrain and combat conditions.