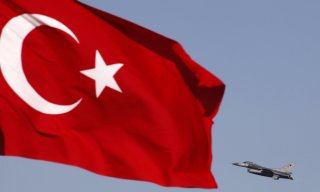 Here's What You Need to Remember: The 1st Main Jet Base’s aged F-4s finally flew into action. Unable to shoot down the rebels’ F-16s, they instead bombed the runway at Akinci, effectively grounding the putsch’s main air assets.

On the night of July 15, 2016, elements of the Turkish military rose up against Pres. Recep Tayyip Erdogan — and very nearly succeeded in killing or capturing their controversial leader.

A few military units remained steadfastly loyal to the embattled president. Among them — the 1st Main Jet Base in Eskisehir in northwestern Turkey. The base’s F-4E Terminator 2020 fighters flew to Erdogan’s aid during the direst hours of the daylong attempted coup.

But the aged fighters were no match for the much newer F-16s that the rebels had commandeered.

At 10:00 on the night of July 15, two pairs of F-16s took off from the 4th Main Jet Base at Akinci, north of Ankara. With a rebel air traffic controller providing a cover story, the F-16s flew low over Ankara and, joined by rebel helicopters, strafed government, police and intelligence facilities, reportedly killing scores of loyalist personnel.

Erdogan had been vacationing on the Mediterranean coast. Apparently tipped off about the impending coup, the president climbed in his Gulfstream VIP jet for the roughly hour-long flight to Istanbul. Arriving over the city, the crew found the airport under rebel control. As Erdogan’s Gulfstream circled the airport, rebel F-16s vectored toward the presidential plane, perhaps intending to shoot it down.

Alternatively, it’s possible the putsch leaders wanted to capture, not kill Erdogan — so that they could try the president in some future revolutionary court. “Coup plotters had [issued an] order that night to force the airplane land at Akinci in Ankara … to catch Erdogan alive,” said Babak Taghvaee, an expert on Middle East military aviation.

In any event, Prime Minister Binali Yildirim, still loyal to Erdogan, reportedly begged the air force to defend the president. But most of the Main Jet Bases declined to help. The 3rd Main Jet Base in Konya, in south-central Turkey, agreed to launch F-16s to “escort” the president — but refused to allow the fighters to shoot down rebel jets.

Apparently only the 1st Main Jet Base was willing to fight for Erdogan. But according to Taghvaee, the base’s upgraded, Vietnam War-vintage F-4s — numbering around 50 — lacked effective air-to-air missiles and could not shoot down rebel planes, even if their pilots wanted to do so.

The crew of Erdogan’s Gulfstream saved themselves and their president by switching the plane’s radio transponder signal to match a Turkish Airlines flight, and by turning off the plane’s external lights.

Thus obscured, the Gulfstream escaped the rebel F-16s. “The risk of shooting down another plane, and losing credibility too, could be a factor affecting the coup’s F-16s’ [ability] to shoot down his plane and kill Erdogan,” wrote David Cenciotti, an aviation expert and blogger.

Once loyalist forces recaptured the Istanbul airport, Erdogan’s Gulfstream landed safely. Speaking to CNN later, the president was vague about his crew’s defensive tactics, but did describe the rebel F-16s flying low overhead and breaking the sound barrier.

Erdogan called on his supporters to rise up. Thousands of civilians joined loyalist forces on the streets, overwhelming rebel troops. The 1st Main Jet Base’s aged F-4s finally flew into action. Unable to shoot down the rebels’ F-16s, they instead bombed the runway at Akinci, effectively grounding the putsch’s main air assets.

The coup petered out on July 16. Nearly 300 people had died, including around 100 rebels. His presidency secure, Erdogan ordered loyal forces to arrest some 7,000 suspected coup-supporters, including hundreds of senior officers.

Not everyone agrees with Taghvaee regarding the F-4 pilots’ actions during the putsch attempt. “The story about the F-4s is completely false,” said Arda Mevlutoglu, a Turkish reporter specializing in military subjects.

“Most of the armed forces were loyal to the republic,” Mevlutoglu said separately. “This is the very reason the coup did not succeed.”

In the aftermath of the coup, the government disbanded several air force squadrons and consolidated equipment. The air force in 2016 had two F-4 squadrons, 171 Filo and 111 Filo. 171 Filo shuttered immediately following the coup, leaving 111 Filo to fly the Turkish air force’s remaining F-4s.

David Axe served as Defense Editor of the National Interest. He is the author of the graphic novels  War Fix, War Is Boring and Machete Squad. This article first appeared in April 2020 and is being republished due to reader interest.