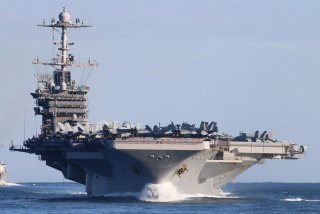 Key Point: U.S. aircraft carriers must either adopt new tactics and equipment for twenty-first-century warfare—or prepare to be sunk.

That’s the essence of a new study by the Center for Strategic and Budgetary Assessments, which examined the air wings aboard U.S. carriers.

The problem is that the Navy carrier groups are using Cold War equipment and tactics designed to intercept and destroy lumbering Soviet bombers before they came within two hundred miles of a task force.

But that won’t work with modern anti-ship missiles, which come in multiple flavors from hypersonic Russian Mach 5-plus cruise missiles to Chinese “carrier-killer” ballistic missiles that can hit targets 2,500 miles away. CSBA predicts anti-ship cruise missiles, which can be fired by aircraft, ships and land-based launchers, will achieve a range of a thousand miles by 2040.

“Today the Navy needs to transform its CVWs [carrier air wings] to counter the emerging challenges posed by great powers like China and Russia and implement new defense and military strategies,” CSBA said. “During the quarter century since the end of the Cold War, CVWs emphasized cost-effectiveness and versatility because the United States did not face a peer adversary. Today’s CVWs, however, now lack the range, endurance, survivability, and specialization to carry out the operational concepts needed to defeat great power militaries. If the Navy is unable to transform its CVWs, Navy leaders should reconsider whether to continue investing in carrier aviation or shift the fleet’s resources to more relevant capabilities.”

The CSBA study calls for a revised carrier wing by 2040, when the Navy’s F/A-18 Super Hornet aircraft will have been retired. The goal would be to maintain distant Combat Air Patrol (CAP) eight hundred to one thousand miles from a carrier or base, as well as attack sea and land targets five hundred to one thousand miles away (the Super Hornet has a combat range of only about four hundred miles). To achieve this, CSBA envisions a carrier air wing equipped with several varieties of unmanned aircraft.

Chief among them would be a long-range unmanned combat air vehicle (UCAV) with a combat range of three thousand miles, capable of being refueled in mid-air. “A large flying wing, a blended wing-body, or a traditional tube-and-wing UCAV could carry similar internal and external payloads as today’s strike fighters,” CSBA said. “And, by being unmanned, the UCAV would be capable of longer endurance than manned strike fighters when refueling is available. A larger aircraft would also be better able to carry accurate, long-range passive and low probability of intercept/low probability of detection sensors and, potentially, the electrical generators needed for directed energy weapons and high-power EW [electronic warfare] systems.”

This long-range drone would also come in an electronic warfare version. The carrier air wing would also have an unmanned aerial tanker, such as the Navy’s MQ-25 Stingray project. Interestingly, CSBA suggests the MQ-25 could be modified to back up the proposed UCAV by flying reconnaissance and electronic warfare missions.

But there would also be a need for a new long-range manned fighter to escort distant strike missions. “A future long-range fighter could be provided by a modified version of an existing fighter or strike fighter by shifting weapons payload to fuel capacity and incorporating additional fuel efficiency measures. This modification could also avoid the potentially unsustainable cost of developing a new fighter development program.”

CSBA projects the cost of procuring and operating a proposed carrier air wing as totaling $25 billion to $40 billion through 2040. To pay for this, the study mentions the possibility of reducing the number of aircraft carriers and carrier air wings.