The Pentagon Wants to Avoid Repeating Its F-35 Procurement Troubles 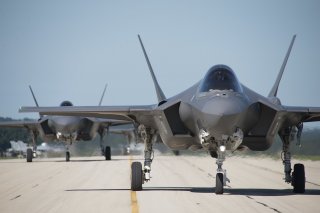 Here's What You Need To Remember: For quite a long time the United States has justified its fighter aircraft projects on a combination of military necessity and military Keynesianism. Expensive fighters provide advanced military capability, but also provide jobs and investment across a broad swath of communities.

For quite a long time the United States (and most of the other Western democracies) has justified its fighter aircraft projects on a combination of military necessity and military Keynesianism. Expensive fighters provide advanced military capability, but also provide jobs and investment across a broad swath of communities. The F-35 exemplifies this, and in fact, internationalized it. Lockheed Martin designed the F-35 development and production process in order to make it invulnerable… to Congress. Producing the fighter around the country made it difficult for Senators and Representatives to justify killing it. Selling the F-35 around the world (and integrating international partners into the production process) provided a backstop by ensuring international pressure to keep the project going.

Dr. Robert Farley, a frequent contributor to TNI, teaches at the Patterson School of Diplomacy and International Commerce at the University of Kentucky. He is the author of the Battleship Book and can be found at @drfarls. This article is being republished due to reader interest.