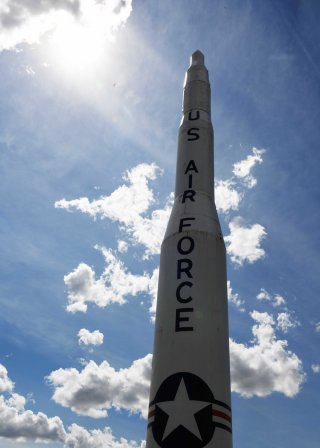 Here's What You Need to Remember: Nonetheless, the Pentagon’s commitment to the GBSD and nuclear triad overall seems solid and is significant in a number of key respects.

Amid all the budget debates, concerns, comments, and disagreements likely to capture attention in coming months on the Hill and at the Pentagon, there is little ambiguity about the increase in funding for nuclear weapons modernization. The 2022 budget submission includes substantial support for the Columbia-class nuclear-armed ballistic missile submarines, nuclear-armed B-21 bomber, and ICBM replacement.

The Pentagon’s Research, Development, Test and Evaluation budget for 2022 increases by a total of $3 billion beyond last year, a large portion of which is specifically slated to expedite development of the Air Force’s new ICBM, the Ground-Based Strategic Deterrent. There is a clear consensus that the 1960s-era Minuteman III ICBM has long been in need of replacement, despite numerous sustainment efforts and upgrades over the years. The Air Force plans to engineer the GBSD to operate into the 2080s and beyond, therefore the service has been working to deliberately build in specific technical standards to enable the weapon to quickly integrate new software enhancements or other technical upgrades.

A large portion of the RDT&E budget, an Air Force report explains, is specifically intended for GBSD engineering, manufacturing, and development, a focus which is significant given that the new ICBM is being built specifically to accommodate software upgrades, targeting improvements and reliability enhancements.

Nonetheless, the Pentagon’s commitment to the GBSD and nuclear triad overall seems solid and is significant in a number of key respects. The new administration’s nuclear review has not yet begun, and debates still circulate on the hill about the strategic scope and focus of the Pentagon’s nuclear weapons posture.  Some have called for the elimination of the GBSD, calling for yet further upgrades to the Minuteman III, and some have even argued in favor of eliminating the ground-based portion of the triad. This argument, while unlikely to gather substantial amounts of support, is raising concern given the pace at which Russia and China are building new ICBMs.

There also continues to be significant debate about the prospects for lower-yield tactical nuclear weapons, and the Navy appears to be seeking to cancel its planned Submarine Launched Cruise Missile program. A low-yield, submarine-launched, low-yield ballistic missile has already been built by the Pentagon as a new variant of the existing Trident II D5 nuclear weapon.  The concern has been that the existence of low-yield nuclear weapons might lower the threshold to some kind of nuclear exchange by introducing the notion that some kind of limited nuclear strike might be possible. Proponents of the weapons argue the exact opposite and say by contrast that the presence of low-yield weapons massively contributes to and enhances the U.S. strategic deterrence posture.

The budget also supports the continued development of the Long-Range Stand-off weapons, or LRSO, a dual-use nuclear-capable air-launched cruise missile. Due to its being engineered for both nuclear and conventional uses, some critics have raised the concern that an enemy under attack might confuse a conventional cruise missile strike for a nuclear one, thus prompting a nuclear response, something likely to escalate and introduce a massive amount of danger. However, the existence of a long-range air-launched nuclear weapon such as this could prove essential to a deterrence posture in the event that advanced air defenses made it impossible for closer in aircraft to operate.