Now Is the Time to Replace the Minuteman III ICBM 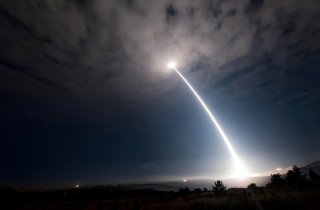 Earlier this month, an unarmed Minuteman III intercontinental ballistic missile test launch was aborted just prior to takeoff. Aborts of this nature are rare but they do happen. When I was an ICBM flight test officer in the early 1990s I took part in a similar test, and the system did exactly what it was supposed to do: it shut itself down as a safety precaution. The Minuteman III is still a reliable weapon—but it’s nearing the end of its service life and it’s time to get serious about a replacement.

The Defense Department is facing the monumental task of modernizing all three legs of the nuclear triad—bombers, ballistic missile submarines (SSBNs) and intercontinental ballistic missiles (ICBMs), and associated infrastructure—at the same time. During the decades of conventional warfare and the war on terror, nuclear force structure modernization was placed on the back-burner, and the bill is now due.

And it’s a big one. Billions of dollars are at stake, as is the security of the United States.

The leg of the triad receiving the most scrutiny is the ICBM force, which to its critics seems an outdated and expensive relic of the Cold War. The Air Force is set to replace the Minuteman with the Ground-Based Strategic Deterrent (GBSD) program, a program that will cost roughly $85 billion with total life cycle costs to 2070 in the neighborhood of $263 billion.

Objections to GBSD, and of keeping ICBMs at all, come from two distinct camps. One advocates for the elimination of ICBMs entirely. This means canceling GBSD entirely. The other advocates for extending the life of the Minuteman III and delaying GBSD as a cost-savings measure.

Unfortunately, both camps underestimate the importance of a credible land-based deterrent.

Advocates for eliminating ICBMs see them as destabilizing, or at the least, no longer strategically relevant. The destabilizing argument stems from claims that ICBMs are sitting ducks because they are in fixed locations, and thus are susceptible to an accidental launch through false alarms of a pending nuclear attack and the “psychological pressure” to use them or lose them.

This is misleading. The missile warning system employed by the United States is the most sophisticated and advanced in the world, and U.S. leaders would have plenty of information about the size and severity of an attack. As a more practical matter, the fact that ICBMs are highly dispersed in hardened silos, coupled with the dispersed nature of bombers and submarines, significantly dampens any urgent need to use or lose ICBMs.

Meanwhile, the deterrent value of ICBMs is as significant today as it was fifty years ago, for several reasons.

First, the most important strategic attribute of the ICBM force is its location. There are 400 ICBMs dispersed over thousands of miles in the heartland of the U.S.es, which means that an enemy contemplating an attack on the American deterrent must contemplate the enormity of launching a nuclear attack against the continental United States itself—which in turn means courting all-out nuclear war. These hardened, underground launch facilities are a targeting nightmare for any adversary considering a first-strike nuclear knockout punch. An enemy attacking these sites would then have to deal with the massive response sure to follow not only from the surviving ICBMs but from the SSBNs and bomber forces as well.

Second, eliminating the ICBM force reduces the number of targets an adversary must target from about 500 ICBM launch facilities and launch control centers to approximately five nuclear submarine and bomber bases. This is tempting—and therefore highly destabilizing.

Third, ICBMs are the most responsive leg of the triad. They are on constant alert and provide an immediate option to respond to a confirmed nuclear attack. The bomber force is no longer on a Cold War, day-to-day nuclear alert status, and so removing ICBMs from the triad could result in a portion of the slower and more vulnerable bomber force being forced to resume expensive nuclear alerts.

Fourth, critics of ICBMs believe sufficient deterrence can be achieved by a “dyad” of bombers and submarines. Not only does this lessen the adversary’s targeting problems, but the advances in the air defense and anti-submarine warfare capabilities of our potential enemies could render this option far less reliable in the future.

The other camp in this debate would prefer to put the Minuteman III through another life extension. In theory, this would delay the start of the program as a cost-saving measure, but in fact, extending the life of Minuteman III to cover the same time period of GBSD would essentially be a wash in terms of cost.

The reality is that Minuteman is at the end of its life as a system. The Minuteman III came online in 1970 and was not designed to accommodate long-term life extension. It was originally built only with an expected ten-year service life; as a result of this initial design decision, materials or components necessary for continued life extension are nearly impossible to find or simply do not exist anymore.

Another option for delaying GBSD would be to reduce the number of tests per year from four to three, as those missile bodies not used up in testing could be put back into the fleet and conceivably help extend the life of the Minuteman III. Unfortunately, it’s not quite that simple.  Less testing will result in a decrease of critical reliability data, hardly an ideal scenario for a fifty-year-old system. The recent aborted launch highlights this issue; continuing to extend the life of the Minuteman III is both technologically risky and financially imprudent.

ICBMs still remain the most cost-effective weapon system in the nuclear triad to build and operate. Now is not the time to debate the importance of ICBMs; now is the time to get serious about replacing the Minuteman III with a new land-based missile, infrastructure and command and control that incorporates new technology and can continue to provide the United States with a reliable deterrent for the next century.

Dana Struckman is a retired Air Force colonel and a Professor of National Security Affairs at the U.S. Naval War College. He was a missile launch officer on active duty and commanded an intercontinental ballistic missile squadron at Minot Air Force Base in North Dakota. The views expressed here are solely those of the author and not of the Naval War College, the Department of the Navy, the Department of Defense, or the United States government.