It’s Official: the U.S. Air Force is Getting a New ICBM 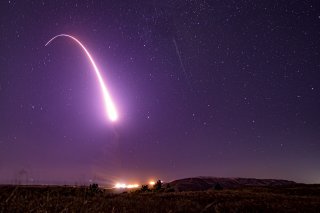 In a news statement, the U.S. Air Force announced that they had awarded Northrup Grumman a $13.3 billion Engineering and Manufacturing Development contract for the Ground-Based Strategic Deterrent (GBSD) intercontinental ballistic missile program.

The GBSD program will replace the United States’ Minuteman III ICBM. The Minuteman family of missiles, currently about 400-strong, are the ground-based leg of the United States’ nuclear triad, along with missiles that can be launched from Ohio-class submarines, as well as air-dropped nuclear weapons.

The original Minuteman missile, originally developed in the 1950s, was a huge achievement that offered much greater reliability compared to older, liquid-fuel ICBMs. Still, the Minuteman III, in service since 1970, is growing long in the tooth and in need of replacement after half a century of continuous service.

In the statement, Gen. Tim Ray, the commander of Air Force Global Strike Command emphasized the evolutionary, rather than a revolutionary approach that the GBSD program represents, explaining that the Air Force is “leveraging stable requirements, modern technology, we own the technical baseline, and have a modular design to keep the program rapid, relevant and affordable.”

Still, Gen Ray explained that the GBSD program will offer some improvements compared to the Minuteman program. “The increased accuracy, extended range and improved reliability will provide the United States a broader array of options to address unforeseen contingencies, giving us the edge necessary to compete and win against any adversary.”

According to the Air Force, the newer GBSD missile will have “enhanced security…to provide the U.S. with an upgraded and broader array of strategic nuclear options to address the threats of today and the future.” These new capabilities are facilitated in part by the United States’ new nuclear warhead, the W87-1.

The new GBSD ICBM warhead is also rather evolutionary rather than revolutionary, and like the GBSD is similar to its predecessor. According to the National Nuclear Security Administration, the W87-1 will provide “enhanced safety and security” when compared to other legacy warheads. Interestingly, the new-and-improved warhead will be certified without underground nuclear testing.

Although the GBSD missile program won’t exactly provide any revolutionary capabilities, the program will offer increased reliability and be more secure. Combined with a new nuclear warhead, the GBSD program will stay relevant for the rest of our lifetimes.