Perfect Storm: How the Army Plans to Fight Electronic Warfare 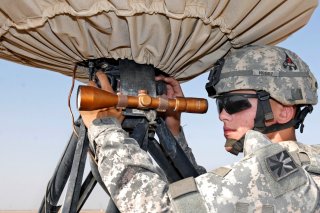 Here's What You Need to Remember: One emerging system, in particular, called Perfect Storm, is engineered to disrupt, jam or destroy enemy radar detection signals. The system is built to be smaller, more expeditionary and upgradeable so as to enable Army attackers to remain undetected while dismounted and moving to attack at high-speeds.

Radios, jammers, sensors and certain weapons are all crucial combat items of known value, yet they are also things that can emit a detectable electronic signature potentially able to give away a location or point of attack. Radio communications can get jammed by electronic attack, weapons guidance systems can be thrown, of course, and, perhaps most of all, an element of surprise can be completely compromised.

Given this, the Army is now working quickly on an electronic-warfare-centered approach to “counter” enemy radar detection and avoid giving up location details to enemies, while also seeking to find and disrupt any and all enemy electronic signals.

During a large Army live-fire exercise at the Yuma Proving Grounds in Arizona, called Project Convergence, Army engineers and weapons developers explained some of these emerging technical strategies to Army Secretary Ryan McCarthy.

“When we look at our adversaries, they are using the electromagnetic spectrum extensively with radar and EW systems. We need an integrated capability that can detect them, ID them, intercept their transmissions and perform electronic attacks and cyberattacks,” an Army engineer said.

One emerging system, in particular, called Perfect Storm, is engineered to disrupt, jam or destroy enemy radar detection signals. The system is built to be smaller, more expeditionary and upgradeable so as to enable Army attackers to remain undetected while dismounted and moving to attack at high-speeds.

“When you look at our current counter-radar capability, it is very extensive and requires a lot of power. This limits our options to proliferate that capability. We have taken up commercial, up-to-data semiconductor manufacturing to produce an affordable integrated circuit,” an Army engineer said.

While effort does achieve the added gain of massively reducing cost by a factor of four hundred, the principle advantage of Perfect Storm is, among other things, that it reduces power consumption by a factor of ten. The goal is to reduce the hardware footprint and draw upon open technical standards to enable rapid software upgrades and modernization so the counter-system can adapt to new threat signals, cover more frequencies or track incoming “frequency hopping” signals.

“A traditional approach to building a system like that would require a lot of size, weight and power. If we share hardware to reduce size, weight, and power, then it makes it more feasible to use software updates to keep pace with the threat. In the old days this would take us years to complete,” the engineer explained to McCarthy.

Another essential element of this is, simply put, the scope, scale and direction of any electronic signature that is emitted. For example, directional antennas can prove more effective at tailoring a narrow or more linear, targeted emission. This kind of electronic warfare approach, as opposed to a 360-degree omnidirectional emission, generates a much smaller and less detectable signal less vulnerable to enemy disruption. In some cases, industry firms such as CACI are using various SIGINT applications to send targeted, more narrow electronic emissions for this specific purpose. The concept is the leverage the warzone benefits of an electronic warfare attack, while of course remaining undetected by an adversary.

Kris Osborn is the defense editor for the National Interest. Osborn previously served at the Pentagon as a Highly Qualified Expert with the Office of the Assistant Secretary of the Army—Acquisition, Logistics & Technology. Osborn has also worked as an anchor and on-air military specialist at national TV networks. He has appeared as a guest military expert on Fox News, MSNBC, The Military Channel, and The History Channel. He also has a Master's Degree in Comparative Literature from Columbia University. This article first appeared last year and is being republished due to reader interest.