Photo Alert: If You're Looking for a Hint on the B-21 Raider, You're in Luck. 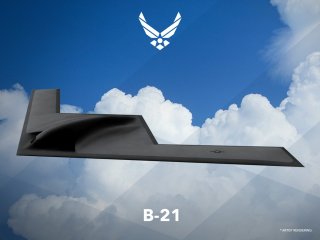 Here's What You Need to Remember: Interestingly, the Air Force also specified that in addition to the Environmental Protection Shelter prototype, they are also designing a General Maintenance Hangar and a Low Observable Maintenance Hangar specifically to maintain and repair stealth coating that is bonded to the airframe's metallic skin.

Although many details of the Air Force’s secretive B-21 Raider stealth bomber program remain unknown, a recent Air Force press release provides some clues as to the stealth bomber’s dimensions, an important piece of information that can help to deduce some of the bomber’s characteristics.

“Environmental Protection Shelters help extend the life of the aircraft and reduce required maintenance by limiting UV exposure, limiting snow accumulation and melt, and limiting icing/de-icing operations experienced by the aircraft over time,” an Air Force official explained. “These shelters also help us generate sorties more quickly by eliminating the need to always have to move aircraft in and out of hangars.”

In the photograph, a pickup truck is parked next to the shelter. Comparing the truck’s approximate 20-foot length to concrete grids on the ground, the shelter is roughly 150 feet long and 80 feet deep. As the shelter is expected to fully cover the B-21, the bomber’s length would not exceed 150 feet.

If these dimensions are correct, than the B-21 will be somewhat smaller compared to the B-2 Spirit stealth bomber. The B-2 is 172 feet long and about 70 from nose to rear wingtips, which extend past the bomber’s rear tail point.

Like the B-21, the B-2 also uses temporary shelters at remote locations that help protect the bomber’s temperature-sensitive outer radar-absorbent coatings from the elements, though the B-21’s more open, uncovered shelter design suggests the new bomber’s stealth coating is more robust and less maintenance-intense that the B-2's. Though outwardly similar to the B-2, the new stealth bomber is said to have significantly reduced radar cross-section, afforded by a stealth coating two generations more advanced than its predecessor.

Interestingly, the Air Force also specified that in addition to the Environmental Protection Shelter prototype, they are also designing a General Maintenance Hangar and a Low Observable Maintenance Hangar specifically to maintain and repair stealth coating that is bonded to the airframe's metallic skin.

Though the stealth bomber’s general shape will likely be similar to that of the B-2, the two bombers would be substantially different. Some aviation experts have suggested that the B-21’s diamond-shaped rear fuselage section could be optimized for stealth at higher altitudes, whereas the B-2 has been touted as an all-altitude stealth bomber.

It is somewhat unclear when exactly the B-21 would enter into service with the Air Force, as previous flight tests have been delayed in part due to the ongoing Covid-19 pandemic. Once they do, however, they’ll be the stealthiest bomber in the sky.