Playing with Fire: China Is Mad That Biden Is Backing Taiwan 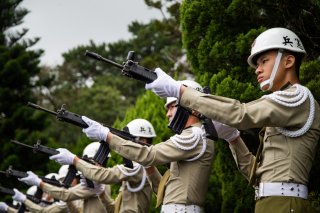 Here's What You Need to Remember: China’s Foreign Ministry issued a statement on Tuesday reaffirming the “One China” policy and urging Washington to stop selling arms to Taiwan. “China’s position on the Taiwan question is consistent and clear. There is but one China in the world, and Taiwan is an inalienable part of China’s territory,” said Foreign Ministry Zhao Lijian.

A top U.S. admiral has warned that China could invade Taiwan in the next six years, sparking renewed concerns over Beijing’s military designs on the island state to its southeast.

“I worry that they’re accelerating their ambitions to supplant the United States and our leadership role in the rules-based international order, which they’ve long said that they want to do that by 2050. I’m worried about them moving that target closer,” said Admiral Phil Davidson at a Senate Armed Services Committee hearing on Tuesday. “Taiwan is clearly one of their ambitions before then. And I think the threat is manifest during this decade, in fact in the next six years.”

Davidson further suggested that it may be time to reassess the “strategic ambiguity” that has characterized Washington’s Taiwan policy in past decades: “I would submit that we’ve got more than 40 years of the strategic ambiguity has helped keep Taiwan in its current status. But you know, these things should be reconsidered routinely. I’d look forward to the conversation.” It is not immediately clear precisely which policy changes would result from a reassessment along these lines. There have been calls in recent years for Washington to extend formal recognition to Taiwan, but others have warned that such a policy would entail unintended consequences both for Taipei and for Washington’s broader strategic standing in the Pacific region. U.S. lawmakers have recently introduced the Taiwan Invasion Prevention Act, proposing deeper bilateral security cooperation with Taipei and to explicitly affirm Washington’s intention to “use military force for the specific purpose of securing and protecting Taiwan against armed attack.”

Davidson argued for “consistent and persistent arms sales” to bolster Taiwan’s military capabilities and to impose steep military costs on prospective Chinese aggression against the island nation. He likewise suggested a greater level of U.S. involvement in certain personnel matters. “I think there’s an opportunity to help in professional development when it comes to Taiwan,” he told Senator Marsha Blackburn. “We think that they have some specific issues that could help provide for their defense—you know, better reserve corps for example, better response.”

The Chinese government did not react directly to Davidson’s testimony. However, China’s Foreign Ministry issued a statement on Tuesday reaffirming the “One China” policy and urging Washington to stop selling arms to Taiwan. “China’s position on the Taiwan question is consistent and clear. There is but one China in the world, and Taiwan is an inalienable part of China’s territory,” said Foreign Ministry Zhao Lijian. “China remains resolutely determined to defend national sovereignty and territorial integrity, and opposes Taiwan independence and external interference.”