RANKED: Historians Don't Think Much of These Five U.S. Presidents 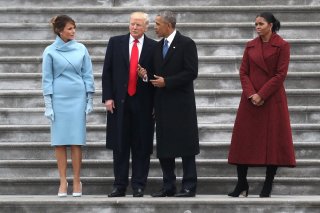 Here's What You Need To Remember: Some of these ratings are probably due to bias among historians, most of whom favor a decisive presidency - and don't think highly of the presidents, either Democrats or Republicans, who just want to keep things quiet.

He’s viewed as a kind of political laughing stock. People roll their eyes at the spectacle of this man carrying on a fifteen-year affair with his best friend’s wife. They snicker at the even more ludicrous spectacle of his White House liaison with a starry-eyed young woman named Nan Britton, thirty-one years his junior. They pursued their sexual trysts in a White House coat closet.

He is excoriated for the famous Teapot Dome scandal involving his attorney general, interior secretary and postmaster general, venal characters who brought into the government a collection of freebooters and scoundrels bent on grabbing whatever booty they could. Their exploits, once exposed shortly after Harding died in office, cast a pall over the nation and placed a blot upon the reputation of the inattentive executive under whose nose they operated. It doesn’t seem to matter that he was never involved in any scandalous behavior himself.

The result is that poor Harding is generally considered the absolutely worst president in American history. In the seven academic polls on presidential rankings that were cited in my book on this subject, Where They Stand, he was listed dead last in six of them. In the seventh, he was second from the bottom.

And yet, leaving aside Teapot Dome, nothing bad happened to the country during his stewardship. He didn’t get the nation into any intractable wars. He quickly pulled the country out of the steep recession he inherited from his predecessor, Woodrow Wilson. He then presided over a robust economy—including real Gross Domestic Product growth in 1922 of nearly 14 percent, one of the best years of economic expansion in the country’s history. Civic unrest, substantial during Wilson’s time, declined significantly during Harding’s tenure.

Aside from the scandals, then, it seems the worst that can be said about him is that the American people elected him to nullify Wilsonism, and he dutifully complied with that mandate.

Thus, an argument can be made that Harding is one of the country’s most underrated presidents. There is a large gap between his actual performance (middling, to be sure, but not disastrous) and his standing in history and within the national consciousness.

There are other such gaps involving other presidents whose survey rankings and standing in the minds of Americans seem inconsistent with what they actually accomplished. Herewith, then, a very subjective assessment of five presidents I consider the most underrated chief executives of our heritage. I emphasize the subjective nature of the assessment because any exercise in presidential assessment necessarily is about as far as we can get from an exact science. Still, it’s fun and perhaps even worthwhile as an exercise in historical analysis.

Consider, next, William McKinley, described by conservative commentator Fred Barnes as “America’s most underrated president.” A solid case can be made in behalf of Barnes’s assessment. In the surveys of historians, he has been ranked generally between fourteenth and eighteenth (with the exception of an eleventh ranking in one poll in 1982). But consider his accomplishments: He managed to get nearly all his priority legislation through Congress, including his signature high-tariff bill in the first months of his administration. He presided over robust economic growth throughout his nearly five years in the White House (before succumbing to an assassin’s bullet in September 1901). And he managed to end the agitation for the free coinage of silver, which had driven the country throughout his first presidential campaign.

Most important, consider this: When he was elected in 1896, America was not an empire, though it had pursued expansionist policies on the North American continent. Within two years of his tenure, America was an empire, with far-flung possessions that included Puerto Rico, the Philippines, Guam, Hawaii, and numerous other islands of strategic significance to the country’s burgeoning deep-water navy. Cuba became a U.S. protectorate. All this was a product of the Spanish-American War, in which the United States destroyed two Spanish naval fleets and kicked that declining country out of the Caribbean and Asia. During McKinley’s presidency, America also took a significant step toward the pursuit of global markets.

Clearly, the McKinley presidency was truly a consequential one, and it seems curious that this president hasn’t ranked higher in the surveys or that his name doesn’t resonate with more force in the country’s historical consciousness.

What’s more, in recent years his standing has improved due to his stance on Reconstruction following the Civil War. He accepted congressional dominance over that policy area and joined the so-called Radical Republicans in imposing harsh measures upon the South designed to protect freed blacks from brutal treatment from disgruntled whites. Until recently, Grant’s willingness to cede presidential authority was decried as a political lapse by academics who extolled strong presidential leadership. But now many academics argue that he was right on the merits and got the policies he desired. He also scored a major foreign policy success with the Treaty of Washington, designed to settle U.S. claims arising from British shipbuilders providing warships to the Confederacy during the war. The claims were referred to an arbitration board, which called for a British apology and payment of $15.5 million to the U.S. Treasury. Aside from the outcome, highly favorable to the United States, the settlement established a precedent for resolution of international disputes through arbitration and created a climate for a new level of friendship between the United States and Britain.

But Grant, like Harding, didn’t pay attention when his collector of internal revenue in St. Louis conspired with his own private secretary to evade taxes on distilleries. The result was that the U.S. treasury was defrauded out of millions of dollars. Not only did the episode reveal a dangerously inattentive management style, but the president’s efforts to protect his assistant during his legal travail also raised questions about his judgment. Beyond that, Grant’s second term was beset by a serious economic downturn.

All in all, it was a checkered eight-year performance. But there seems to have been enough accomplishment here to justify a ranking well above what he has received over the decades. As Princeton’s Sean Wilentz has written, “Though much of the public and even some historians haven’t heard the news, the vindication of Ulysses S. Grant is well under way. I expect that before too long Grant will be returned to the standing he deserves…”

We must not exclude from this list Calvin Coolidge, who presided over peace, prosperity and domestic tranquility for six years after inheriting the presidency at the death of Harding. He also effectively cleaned up the scandal bequeathed to him by Harding. It isn’t surprising that Coolidge was elected in his own right in 1924 and that his full-term record secured White House retention for Republicans when Herbert Hoover ran to succeed him in 1928. The voters were happy with his performance, notwithstanding his quiet but iron-willed devotion to limited government. That governmental passivity no doubt contributed to his lackluster rankings in the academic surveys on the presidency, since most academics tend to be liberal, particularly on the question of presidential activism. In the seven polls I have cited, he gets an average ranking of twenty-sixth.

But Ronald Reagan never slighted Coolidge in his own assessment of the presidents. Reagan liked him so much that he had a portrait of Coolidge placed on the wall of the White House Cabinet Room. For Reagan, the question wasn’t one of presidential style but rather of performance. And he viewed Coolidge as a president who performed.

Some have argued that Coolidge’s economic policies, by fostering massive corporate investment that ultimately outstripped consumers’ spending power and fueled an unsustainable stock market boom, created an imbalance in the national economy that led inevitably to the Great Depression. But the argument that Coolidge bears responsibility for that economic cataclysm is more theoretical than provable, and hence he seems to be an underrated president.