Is the Raptor Going Extinct? 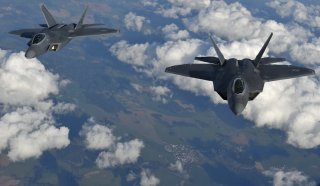 Here's What You Need to Remember: By about the 2030 timeframe, you’re talking about a 40-year-old platform [in the F-22], and it's just not going to be the right tool for the job, especially when we’re talking about defending our friends like Taiwan and Japan and the Philippines against a Chinese threat that grows and grows

The United States originally planned to buy a total of 750 twin-engine, all-weather Lockheed Martin F-22 Raptors but the program was cut short to just 187 operation production aircraft due to the high cost. The last F-22s were delivered in 2012, and now there are reports that the future of those aircraft could be in question.

Air Force officials have noted the fifth-generation stealth aircraft simply lacks the magazine depth as well as the range required to meet the role for the service's air superiority fighter in the next decade. That doesn't mean the F-22 Raptors currently in service will be sent out to pastures and museums anytime soon, but unlike the Lockheed Martin F-35 Lightning II, the Raptor won't be flying high into the 2070s.

The retirement of the F-22 could depend on when a sixth-generation fighter replacement takes to the skies.

"By about the 2030 timeframe, you’re talking about a 40-year-old platform [in the F-22], and it's just not going to be the right tool for the job, especially when we’re talking about defending our friends like Taiwan and Japan and the Philippines against a Chinese threat that grows and grows," Lt. Gen. Clinton Hinote, the Air Force deputy chief of staff for strategy, integration and requirements told Defense News in a May 13 interview.

Lt. Gen Hinote wasn't the only top Air Force brass to speak out against the F-22.

Air Force Chief of Staff Gen. Charles "CQ" Brown said at a McAleese and Associates conference Wednesday that the service is thinking about the future fighter fleet and that doesn't include the fifth-generation F-22. Gen. Brown said the goal is to get down to four fighters or as Brown described it four plus one – down from the seven the service currently operates. The "plus one" would include the A-10, a ground-attack aircraft that isn't a pure fighter.

"Right now we have seven fighter fleets," Brown said, and added, "My intent is to get down to about four. With that four, what is the right mix?"

That could include the F-35, which is seen as the "cornerstone" for the fleet, along with the Boeing F-15EX, as well as the Lockheed F-16 and Fairchild RepublicA-10 for a "while at least," and then the Next Generation Air Dominance (NGAD) fighter. The F-15E and the notably the F-22 didn't make the list, but according to Air Force Magazine, which cited a spokesperson from the service, Brown was thinking longer out to at least 2030 or beyond.

"The F-22 is still undergoing modernization," USAF spokeswoman Ann Stefanek explained. "There are no plans to retire it in the near-term."

Clearly, the F-22 will "eventually" retire, but it is likely it would be sooner than later. The Raptor's likely successor will be the NGAD.

"We're treating [the F-22] as the bridge to the NGAD capability," added Hinote in his exclusive interview.

As for the other aircraft that the Air Force looks to cut, the F-15EX is already on track to replacing the aging fleet of F-15C/D fighters as well as the F-15E Strike Eagle, while the A-10 and the F-16 could eventually be replaced by additional F-35s.

"I don't need to make that decision today," Brown said. "That's probably six, seven, eight years away into the future."