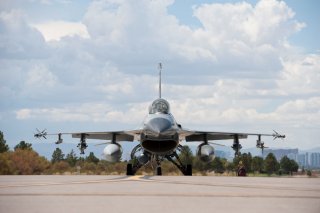 The Mitchell Institute of Aerospace Studies recently published a study that recommends the rapid retirement and divestiture of the Air Force’s fourth-generation fighter jets.

Today’s Fighting Falcon dates back as far as the 1970s, a circumstance that raises questions as to how the combat aircraft has sustained its combat relevance and performance into today’s modern and vastly more substantial threat environment. The SLEP improved the upper wing skin and fittings. Additionally, it adjusted the bulkhead and canopy.

Part of the equation relates to an effort to integrate some of the F-35 fighter jet’s technologies into the Fighting Falcon such as an Active Electronically Scanned Array (AESA) radar. The radar allows the Fighting Falcon to find, detect and track enemy threats at greater ranges. SLEP is expected to extend the flight time of Fighting Falcons from roughly six thousand to seven thousand flight hours all the way to eight thousand or more flight hours. On top of that, the upgrades have prompted the Air Force to have the Fighting Falcon fly up to twelve thousand hours. Lockheed Martin, which developed the AESA radar, claims it can track as many as twenty targets at one time, a scenario that allows the Fighting Flacon to be more effective in major-power warfare.

Thus, the AESA radar is a massive upgrade beyond the mechanically-scanned radar previously carried by the Fighting Falcons. The AESA radar can scan in a 360-degree sphere that includes horizontal, vertical and diagonal vectors. In recent years, the Fighting Falcon has received new cockpit avionics such as moving map displays, video in the cockpit, digital graphics screens and new target tracking systems. Upgraded Fighting Falcons use a high level of onboard automation designed to free up a pilot’s workload.

It’s notable that Lockheed Martin isn’t only focused on these upgrades. The company has been building a new F-16V Viper variant that uses new computers, software, a high-definition cockpit display. Also, the “V” model comes with a new data bus, electronic warfare suite, missile warning sensor and helmet-mounted cueing system. This is the technical starting point for Lockheed Martin’s next-generation F-21, which will be specifically built for India. The F-21 will have the AESA radar and a next-generation targeting system known as Infrared Search and Track (IRST) technology. IRST, which is used extensively in F/A-18 Super Hornet fighter jets, is a passive, long-range sensor that searches for and detects infrared emissions. Much like the AESA, the IRST can track multiple targets at once and operate in an electromagnetic warfare environment. IRST is a passive, long-range sensor, that will allow the Fighting Falcon to conduct air-to-air targeting.