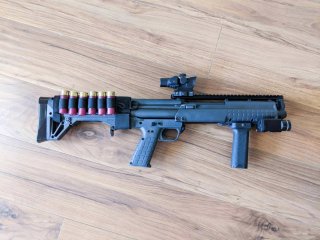 Here's What You Need to Remember: While some might ask why Kel-Tec went with a pump-action rather than a semi-automatic, the company explained it succinctly on its website, “Pump-action puts the reliability in the hands of the user.”

Tactical is literally in its name, but even if that wasn’t the case it is hard not to see the Kel-Tec Shotgun (KSG) Tactical as anything but one that is ready for action. With its 13.7 inch (343mm) barrel, this is available only to military, law enforcement, or civilians as an NFA restricted short-barreled shotgun (requires a tax stamp).

Since its introduction in 2011, the Kel-Tec pump-action shotguns have proven themselves to be true twenty-first-century firearms, and the KSG offers the biggest leap forward in shotgun technology in more than a century. Instead of a magazine tube, which necessitates an overly long weapon or a vertical box magazine that limits the compact nature of a CQB (close quarters battle) weapon, the KSG features a dual-tube magazine that provides the ability to change out the ammunition load without emptying the shotgun. The two magazines are parallel to one another and use no extra vertical space.

As a result, the weapon remains as compact as a bullpup rifle, making it ideal for those CQB situations or even home defense. The shotguns also load and eject from the bottom, making it truly ambidextrous without needing to change out a single part.

The military/law enforcement KSG Tactical is about as compact as it comes. Not only is it just an inch and half over a foot long, but it weighs just 6.2 pounds (2.8 kg) unloaded, and yet it can still hold 4+4+1 or 5+5+1, depending on shell size. This allows the weapon to be configured and then adjusted as the mission determines—where one tube could be used with mini-shells while the other could be filled with 3-inch buckshot. A manual selector level allows for either a fast reload or swift ammunition change on the fly.

While some might ask why Kel-Tec went with a pump-action rather than a semi-automatic, the company explained it succinctly on its website, “Pump-action puts the reliability in the hands of the user.”

The KSG Tactical’s foregrip is molded into the forend and houses a 420-lumen KelTec light with momentary switch, while the muzzle is treated for a choke adapter or breacher comp. It also comes standard with a Picatinny style top rail for mounting an optic.

The Tactical Shotgun is just over 21.5 inches (546mm) long—while the non-military/law enforcement KSG version is available at 26.1 inches and is legal in all states. It utilizes the same innovative dual-tube magazines can hold 6+6+1 rounds of 12-gauge 3-inch shells or 7+7+1 of 2-3/4-inch shells. It features an 18.5-inch barrel and comes standard with Picatinny-style rails for mounting your favorite accessories on both the top and bottom.

The KSG line has the advantages of a pump-action shotgun but the compact-sized of a (legal) sawed-off shotgun!