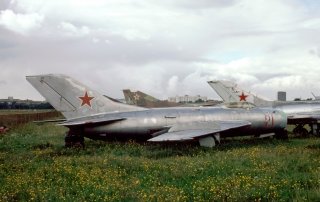 Here's What You Need to Remember: The Chinese were one of the biggest MiG-19 customers, although they had a different name for the speedy little jet.

North Korea is one of the only countries that still maintains a fleet of J-6/MiG-19 planes. Although it was speedy for its era, it couldn’t hold its own anymore.

The MiG-19 was designed to address issues that stemmed from the MiG-15 and similar MiG-17 fighters. While both fighters were capable when compared to their contemporaries, they suffered from controllability issues when approaching the speed of sound.

The MiG-19 was designed to handle supersonic speeds better and to have a greater range than both the MiG-15 and MiG-17s. It was “the first Soviet production fighter capable of supersonic speeds in level flight,” according to the U.S. Air Force, an important distinction.

A dual-engine airframe, the MiG-19 was outfitted with new engines. Combined, they produced roughly double the amount of thrust than the MiG-17 could.

The MiG-19 had four hardpoints to which ordinance or fuel tanks could be attached, though two of the four were for fuel tanks only, limiting the MiG-19’s available firepower.

What it lacked in bombs and rockets it made up for with a whopping three 30 millimeter autocannons. These guns would provide an advantage over American supersonic fighters and bombers, like the F-4 Phantom during the Vietnam War.

American designers had assumed that at Mach 1+ speeds, classic World War II-style rolling dogfights and gun battles would not occur. What engineers and designers did not anticipate were the moments in flight after rapid maneuvers, when airspeed was lower. Airframes that did mount cannons usually carried 23-millimeter versions that were significantly less powerful.

The heavy American F-4s (and really most of American Vietnam-era planes) lacked maneuverability at low speeds. It was at these points in air battles that the slower but more maneuverable MiG-15, 17, and 19 would outmaneuver their American opponents, sometimes dispatching them with a massive amount of high explosive or armor-piercing incendiary fire.

According to the U.S. Air Force, “Possibly as many as 10,000 MiG-19s, in various versions, were built by the Soviet Union, China, Poland, and Czechoslovakia. Many other countries used the MiG-19, including Cuba, North Vietnam, North Korea, Iraq and most of the Warsaw Pact nations.”

The Chinese were one of the biggest MiG-19 customers, although they had a different name for the speedy little jet.

The Chinese were able to produce quite a few copies of the MiG and called their version the Shinyang J-6. The J-6 was also exported to North Korea, which still flies approximately 100 of J-6s.

The J-6 frame is flown by a small number of countries, and North Korea may be the biggest operator. The MiG-19 enjoys a bit more use with other countries, notably Vietnam and Pakistan, though they likely don’t have many more flight hours left in them. But, for now, both frames keep on cruising.