The Rhino: How One Tank Helped the Allies Win World War II 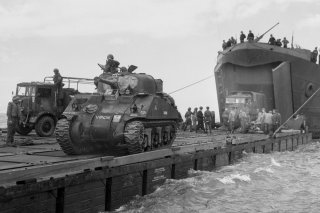 Key Point: A simple innovation highlighted how soldiers in the field were able to adapt, overcome and win the day.

Allied tanks were crucial to securing a beachhead in Normandy after the D-Day landings on June 6, 1944—and while there were a number of specially designed and modified tanks, one of the more successful innovations wasn't a simple field modification. Yet it proved crucial in breaking through French hedgerows.

Among the numerous weapons developed specifically for Operation Overlord, were the "Hobart's Funnies"—a series of tanks that were designed to fill specific roles during the D-Day landings. These were conceived by and named after British Major-General Sir Percy Hobart. Among the most famous was arguably the DD tank—the Duplex Drive—which was an amphibious tank fitted with a large watertight canvas housing that actually enabled it to float while a pair of propellers provided propulsion.

The DD "swimming" Sherman was used on all five beaches on D-Day. The DD tanks worked well in the reasonably calm waters off Gold, Sword, and Juno beaches, while twenty-seven out of twenty-eight tanks reached Utah Beach. However, in the rough waters of Omaha Beach, almost all of the tanks launched offshore were lost.

Other "Funnies" included the "Crocodile," which was a Churchill tank that was modified with the addition of a flame-thrower, which made it one of the most deadly weapons in the British Army's arsenal. It proved so successful it was used throughout the latter stages of the war in Europe. Another was the "Crab," which was a Sherman tank equipped with a mine flail to clear a path through a beach minefield. The fail tank wasn't entirely a new invention—a Matilda "Scorpion" had been used two years earlier at the Battle of El Alamein, but in the case of the Crab the fail was powered by the tank's main engine.

Hobart's Funnies proved successful, but none were able to deal with a problem that military planners failed to address prior to the invasion—the French hedgerows, or "bocage." of Normandy. These were the hedges and small trees that grew on the earthen embankment that since Roman times had bordered the fields in the French countryside of Normandy.

The hedgerows caused great problems as the Allied units could not see beyond the next hedgerow while Germans found these to be perfect defensive positions. Allied tanks were unable to climb the embankments without exposing the underside while tanks moving down the narrow roads made prime targets for the enemy. Worst of all disable tanks created a bottleneck that couldn't be easily moved. As a result a small German unit with anti-tank weapons could prevent an entire battalion from advancing.

The solution came not from Major-General Hobart but rather from American Sergeant Curtis G. Culin of the 102nd Cavalry Reconnaissance Squadron, 2nd Armored Division, who developed a type of metal sawtooth tusk that could be fitted to the front of a tank. It was made of little more than scrap steel that originally came from the beach obstacles and it proved strong enough to cut through the hedgerows.

The design proved successful and as other tanks were outfitted with similar tusks these quickly began to be called "Rhinoceros" as the plate charged through the bocage like the horn on the African beast. However, it wasn't long before it became known as the Culin Rhino device or Culin hedgerow cutter—and it caught the notice of General Omar Bradley, who ordered that as many Sherman tanks as possible be fitted with the device. By the launch of Operation Cobra—the breakout from Normandy—some sixty of Allied tanks were fitted with the Culin Rhino.

For its creation, Sergeant Culin was awarded the Legion of Merit. This simple innovation highlighted how soldiers in the field were able to adapt, overcome and win the day.

Peter Suciu is a Michigan-based writer who has contributed to more than four dozen magazines, newspapers and websites. He is the author of several books on military headgear including A Gallery of Military Headdress, which is available on Amazon.com. This article first appeared earlier this year and is reprinted due to reader interest.