Robotic Dogs Will Be a New Staple on U.S. Military Bases 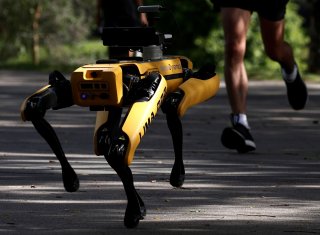 Here's What You Need to Remember: Robot dogs will be programmed to travel along a specific patrol path, yet perhaps in the future they could be engineered with an ability to respond to moving objects and make certain calculations regarding sensing, targeting and networking without needing human intervention. The concept is, as is the case with most similar military applications, to ease the cognitive burden upon human decision-makers by performing various processes more quickly and efficiently.

They don’t need food, water, grooming or a long walk, but groups of new dogs will be protecting Tyndall Air Force Base in Florida. Meet the military’s new robot dogs.

Long in development, a new breed of unmanned “computerized canines” will be conducting surveillance missions around the perimeter of the facility to ensure security, free up manpower and ideally network relevant sensor data back to human decision makers. While semi-autonomous, they will be driven by humans using a virtual reality headset, according to an Air Force report.

“We will be able to see exactly what the robot dog is detecting through its mobile camera and sensor platform if desired, we will also be able to issue verbal commands to a person or people through a radio attached to the dogs,” Maj. Jordan Criss, 325th Security Forces Squadron Commander, said in the report.

Tyndall is one of the first places where the robots will be on patrol and, as anticipated, they are radio-networked to humans to provide real-time security updates. While these robots will be used for base security, it certainly takes little vision to see how they would clearly be useful in major combat operations, especially given the rapidly-advancing technical progress with autonomous systems, advanced navigational and sensor algorithms, and artificial intelligence.

Of course, an immediate thought which comes to mind is simply that these kinds of robot dogs would be useful for Forward Operating Base (FOB) protections, given that deployed forces need to maintain a secure perimeter. Imagine how helpful these would be in places like small Combat Outposts in Afghanistan where small groups of combat soldiers are surrounded by mountains and wooded, rocky terrain able to obscure attacking forces.

Perhaps these robots could increasingly be programmed with advanced computer algorithms enabling increased level of autonomous navigation, meaning they could be programmed to avoid or traverse rugged terrain without needing human intervention? Perhaps they could be engineered with advanced computer technology to expedite the Processing, Exploitation and Dissemination (PED) of sensor data to identify moments or objects of relevance to human commanders.

Criss stated that the robot dogs will be programmed to travel along a specific patrol path, yet perhaps in the future they could be engineered with an ability to respond to moving objects and make certain calculations regarding sensing, targeting and networking without needing human intervention. The concept is, as is the case with most similar military applications, to ease the cognitive burden upon human decision-makers by performing various processes more quickly and efficiently. In addition, perhaps the various dogs on patrol can be networked to one another in a way that enables sensor data to be pooled, analyzed and organized, thus saving time and energy for humans?

Finally, it certainly seems within the realm for AI-enabled robots to be armed as guarding “sentries” able to prevent or stop attacks against U.S. bases, installations and facilities. While Pentagon doctrine ensures that humans make decisions about lethal force, there may be a wide sphere of defensive uses for AI-capable robots. This is already coming to fruition, for instance, when it comes to things like FOB drone defense, weapons can be programmed to detect, organize and then take out approaching threats for purely defensive purposes. This means robotic platforms can find and take out attacking enemy mortars, artillery, drones and even certain missiles, without needing to delay response time for human decision makers.