Robots Could Soon Take Over the Army’s Anti-Armor Mission 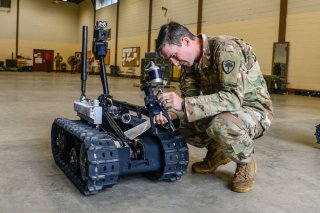 Here's What You Need To Remember: The fast-evolving concept is to optimize state-of-the-art networking between manned armored vehicles operating in a command and control capacity and forward-positioned armed robots capable of testing enemy defenses, performing surveillance under enemy fire or simply firing upon and destroying enemy targets when directed by humans.