Robots Delivering Ammo? The Army Is Making it Reality 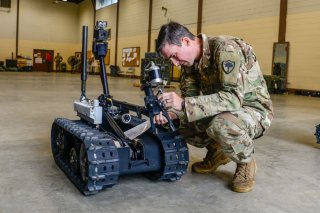 Here's What You Need to Remember: Robotic air drones could also be used quite possibly to autonomously deliver ammunition to helicopters or even fixed-wing aircraft engaged in a heavy, fast-paced exchange of fire with enemy forces. Such a scenario would require some kind of automated delivery or intake system, enabling aircraft to accept and integrate ammunition deliveries.

The Army seeks self-guiding, auto-loading robots empowered to arm combat vehicles and move ammunition from one platform to another quickly while reducing risk to soldiers and coordinating combined joint attacks.

The emerging artificial intelligence-centric system seeks to resolve a resupply problem often confronted by attacking forces traveling with finite amounts of ammunition. Furthermore, the need for ammunition, and the pace at which it is needed, is vastly different than it may have been in previous years.

“The rate of fire is different now compared to autoloaders that existed in the past. We have sophisticated ammo now. The autoloading problem is a really difficult one. We have confidence in our armaments center,” Brigadier General John Rafferty, Director, Long Range Precision Fires Cross Functional Team, Army Futures Command, told The National Interest.

By referring to sophisticated ammunition, Rafferty may have been citing several emerging high-tech artillery and rocket munitions such as new Excalibur variants. These include “shaped charge” or “shaped trajectory” 155mm rounds able to both course correct and, in some cases, tailor blast effects to meet a specific threat.

An AI-capable ammunition-carrying robot might instantly know where ammo is most in need and network requests back to supply lines, optimizing the pace of attack and sustaining high op-tempo attack missions.

Digital auto-loading and artillery systems have been here for many years, going back as far as the Army’s cancelled Crusader platform and Future Combat Systems. Auto-loading and advanced data links are already in the process of arming upgraded Abrams tanks, a combat circumstance which improves the rate of fire, underscoring the need for fast ammunition resupply.

“We don’t necessarily want an autoloader as much as an improved rate of fire. We have a group of talented people solving hard problems. We are going through the process with small business innovation and Army research,” Rafferty said.

Robotic ammunition transport will also need to incorporate what Rafferty explained as “trade-offs,” given that munitions of all sizes will need to transport quickly and efficiently, a circumstance requiring light-weight, fast-moving robots. Perhaps some drones can carry heavier loads while others move quickly with smaller cargo-load to meet urgent demands.

“Some ammo is big and heavy, so we have to make a lot of trades to make sure we have the right space, weight and power to give ourselves many options,” Rafferty added.

It is even possible that robotic ammunition platforms could help identify the kind of ammunition needed for a particular attack. For instance, perhaps an Abrams tank needs a canister round to shoot many fragments in an array to attack slightly dispersed groups of ground forces. Conversely, if confronting an armored vehicle threat, a robot could organize and deliver High Explosive Anti-Tank rounds to fire upon enemy armored vehicles. AI can also organize sensor information and make nearly instant calculations based on a number of otherwise separate variables such as range, terrain, navigational details and the configurations of enemy targets in relation to a surrounding high-value enemy area.

Robotic air drones could also be used quite possibly to autonomously deliver ammunition to helicopters or even fixed-wing aircraft engaged in a heavy, fast-paced exchange of fire with enemy forces. Such a scenario would require some kind of automated delivery or intake system, enabling aircraft to accept and integrate ammunition deliveries. In some cases, such as with helicopters, manned crews might be able to receive ammunition. However, it seems automated ammunition reception or intake, responding to a robotic arm delivering ammunition, might greatly expedite the process by virtue of an ability to draw upon accelerated computer processing speeds.

Both air and ground robotic ammunition-carrying drones can extend range and dwell-time for attacking forces, precluding a need to stop, return or pause to rearm. The technology could therefore enable an advancing mechanized force to extend its penetration into enemy forces should initial assaults be met with success.