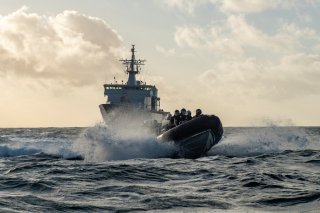 Here's What You Need to Remember: Navy Systems will be tested against supersonic high-diving targets plummeting towards the task group at speeds in excess of 12,000mph – roughly 16 times the speed of sound – as well as sea-skimming drones simulating missiles, weaving at high subsonic speeds in a bid to outfox the radars tracking them.

Last May, three Royal Navy warships joined their NATO allies and began the world’s largest test of naval air and missile defenses. In total fifteen ships, more than ten aircraft, and approximately 3,300 personnel will participate in Exercise Formidable Shield, which is scheduled to run for three weeks off Scotland’s Outer Hebrides and Norway’s Arctic coast.

During the exercise, the various warships will test missile systems, sensors, software – and the hundreds of men and women operating them as they demonstrate their ability to deal with the latest aerial threats. Live missile launches will be conducted as the NATO allies demonstrate their individual and collective ability to track, identify and ultimately destroy incoming threats in the skies, including testing ballistic missile defense.

The Royal Navy announced that HMS Dragon is leading its participation as a dedicated air defense destroyer designed to shield a task group with her Sea Viper missile system. The Portsmouth-based warship will utilize her Sampson radar – the spinning ‘spiked egg’ atop her main mast – to detect and follow a missile’s progress from launch to ‘splash’ (when it is destroyed).

During Formidable Shield, both systems will be tested against supersonic high-diving targets plummeting towards the task group at speeds in excess of 12,000mph – roughly 16 times the speed of sound – as well as sea-skimming drones simulating missiles, weaving at high subsonic speeds in a bid to outfox the radars tracking them.

The Royal Navy will also conduct tests of its Dragon’s Sea Viper missiles intercepting a Firejet target drone, which is able to fly just twenty feet over the waters of the Atlantic at more than 400mph.

Other systems, including the U.S.-made Sea Sparrow and Standard Missiles 2, will also be tested during the live-fire operations. In addition, high-end software will assist the crew in detecting incoming threats. It will also highlight the capability of software to take the burden off a team in the operations room who must pore over the display screens constantly looking out for potential threats.

The Spanish Álvaro de Bazán-class frigate ESPS Cristóbal Colón (F-105) was reported to be this year’s designated flagship for the execution of the Formidable Shield 2021 exercise, which is scheduled to take place May 15 to June 3.

Ten NATO nations, including Belgium, Denmark, France, Germany, Italy, the Netherlands, Norway, Spain, the UK, and the USA are reported to be taking part in the exercise, committing ships, aircraft, ground assets, and staff.

The Formidable Shield naval exercises are staged every two years and are intended to assure allies, deter adversaries, and demonstrate the commitment of NATO to collective defense.

“Formidable Shield 21 is an important opportunity to further develop fighting capability and domain integration against a challenging set of realistic targets – a demonstration of our resolve to counter the threat,” added Morley.

This article first appeared in 2021. It is being reprinted due to reader interest.