Careful, This Stealth Target Drone Could Be a Warplane in Disguise 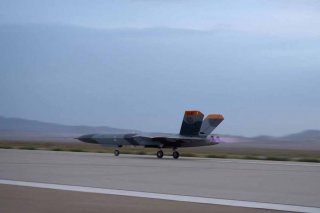 Here's What You Need to Remember: The drone’s development is part of a wider Air Force effort to provide realistic training to its pilots for doing battle with the latest radar-evading warplanes.

The U.S. Air Force soon could deploy a radar-evading target drone. One that easily could evolve into a front-line warplane.

The Fifth-Generation Aerial Target, or 5GAT, is roughly the size of a T-38 training jet and like the T-38 boasts two J85 engines. The prototype with its sharp angles bears a passing resemblance to an F-22 stealth fighter, albeit one without a cockpit.

The company plans to fly the drone for the first time in early 2020. The Air Force wants the 5GAT drone for target practice in order to help fighter pilots prepare for dogfights with Russian and Chinese stealth fighters.

The drone’s development is part of a wider Air Force effort to provide realistic training to its pilots for doing battle with the latest radar-evading warplanes. The service also plans to organize some of its F-35 stealth fighters into an “adversary” squadron that would play the role of the enemy during realistic war games.

As a bonus, with a few changes, the 5GAT could be so much more than a mere target.

The U.S. military uses a variety of drones as targets in live-fire exercises. The Pentagon also has deployed drones in combat in order to distract enemy air-defenses, most notably during the 2003 invasion of Iraq, when Navy drones dropped radar-foiling chaff.

Aerial targets have formed the basis of front-line drone types. In 2017, the Air Force paid San Diego drone-maker Kratos $41 million to develop one of the company's aerial target designs into a low-cost, pilotless strike aircraft that could fly alongside manned planes.

"The appeal of an unmanned system is that you can use it in ways that you wouldn't a manned plane, such as sending it on more dangerous missions where you don't mind it being shot down," explained P.W. Singer, an analyst at the New American Foundation in Washington, D.C.

The new target could join existing types performing a range of roles. Northrop Grumman supplies the military with a variety of custom-built targets. During the Vietnam War, variants of Northrop's BQM-34 drone hauled cameras, electronic sniffers and radar-jamming gear into enemy air space.

In the early 1970s, the Air Force modified a few BQM-34s to carry missiles and bombs for testing.

Today the Air Force operates remote-controlled QF-16s drones that Boeing produces using retired, early-model F-16s. Starting in 2015, the Air Force began working on computer code that quickly can transform the QF-16 into a robotic wingman for manned fighters such as the F-35.

"You take an F-16 and make it totally unmanned," is how Bob Work, then the deputy defense secretary, described the Loyal Wingman program in 2016. "The F-16 is a fourth-generation fighter, and [you] pair it with an F-35, a fifth-generation battle network node, and have those two operating together."

The Loyal Wingman F-16 could fly alongside the F-35 until the stealth fighter's pilot directed the unmanned plane to fly ahead in order to probe enemy defenses. The drone F-16 also could fire missiles or drop bombs at the pilot's command.

The same software is slated to go into the Kratos strike drone, and could transform the new 5GAT into a stealthy loyal wingman. “We believe that it has a high potential of solving some of the Loyal Wingman requirements, once they’re defined,” Sierra president Roger Hayes told Flight Global.

For starters, while the 5GAT is supposed to be subsonic, it still will be fast. “We’re going to limit it to high-subsonic,” Hayes said. “It would probably go supersonic without much trouble, but none of the structure was analysed or designed for supersonic [flight], nor were the inlet lips.”

The 5GAT lacks a weapons bay but it could carry munitions on external pylons. “We can carry all kinds of electronics, artificial intelligence gear, [intelligence, surveillance and reconnaissance] equipment,” Hayes stressed.

The Air Force also has contracted with Kratos and another company, 5-D Systems, to build their own stealthy 5GAT drones for testing. The flying branch could pick one or more of the three designs for production.