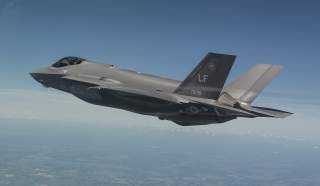 “The draft 2020 defense policy bill prohibits the Air Force from transferring any low-rate initial production F-35s to the adversary air role until the chief of staff submits a report to Congress detailing the service’s plan for modernizing its organic aggressor fleet,” Amy McCullough reported at Air Force Magazine.

The Air Force still could get its stealthy aggressors, but Air Force chief of staff Gen. David Goldfein first must submit a report to lawmakers.

The law requires the report to detail “potential locations for F-35 aggressors, including an analysis of installations that have the size and availability of air space necessary to meet flying operations requirements; have sufficient capacity and availability of range space; are capable of hosting advanced threat training exercises; and meet or require minimal addition to the environmental requirements associated with the basing action.”

In addition, Congress requires Goldfein to lay out the Air Force’s vision for its existing aggressor force, which includes two squadrons that fly F-16s.

The Air Force isn’t waiting for the 65th Aggressor Squadron to form before it sends F-35s to portray enemy planes. For two weeks starting in late April 2019, F-35s from the active-duty 388th Fighter Wing and reserve 419th Fighter Wing played the part of enemy fighters in a wide-ranging war game at Hill that also involved Air Force pilot trainees flying F-16s as well as adversary planes from Draken.

Maj. Benjamin Walters, an F-16 instructor pilot, praised the F-35 pilots playing red air. “These guys are getting really good at flying the F-35 and they can present some aggressive situations that force young pilots into errors,” Walters said.