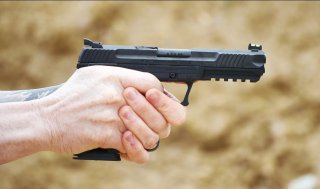 Here's What You Need to Know: Any which way you cut it, the Ruger 57 is a great handgun to have around. It has that sweet spot mix of fun and genuine practicality.

We have to talk about the price. It has an MSRP of $850, which might seem like a lot. The important thing to remember is that at the moment the Ruger 57 is an alternative to the FN Five-Seven, which costs $1200. That’s a cool chunk of change you’re saving if you pick up a Ruger 57.