Ruger LCP: There's No More Concealable Self-Defense Gun Out There 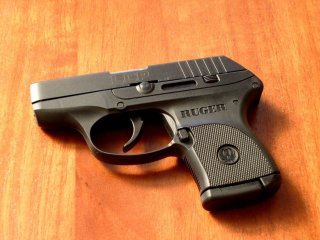 Here's What You Need to Remember: If you’re a big fan of concealed carry weapons and want a pistol you’ll barely even notice is there, look no further than the Ruger LCP. It’s built with self-defense in mind and could be your new favorite for a concealed carry weapon. What makes the LCP stand out from other lightweight pistols? Let’s take a deeper look.

If you’re a big fan of concealed carry weapons and want a pistol you’ll barely even notice is there, look no further than the Ruger LCP. It’s built with self-defense in mind and could be your new favorite for CCW.

What makes the LCP stand out from other lightweight pistols? Let’s take a deeper look.

The LCP’s accuracy is pretty satisfactory, once you get used to the size of the pistol and the inherent differences that come with shooting something this small. My average group size (3-5 shot groups) from 5 yards was around 1.3,” and I was able to keep all 7 shots within a 10” target from 10 yards. Keep in mind that the LCP is designed for self-defense at point-blank range, not target shooting, so the accuracy is more than acceptable for this purpose.

Ruger has always been known for building dependable machines, and the LCP is no exception. It’s well-designed and reliable, I’ve shot over 300 rounds with it and only experienced one misfeed. This was most likely caused by user error, however, as I’ve noticed a proper grip on this tiny pistol is important to eliminate any malfunctions.

This pistol features a black polymer grip and frame with no sharp edges, and the hammer is recessed into the slide to prevent snagging, which is great for concealed carry. It’s a double-action, hammer-fired mechanism, and there’s no levers or safeties to worry about in high-pressure situations—just point and shoot. The downside here is the low profile, fixed sights. They’re not the best sights, and both the front and rear sights are integrated on the slide. They cannot be adjusted or replaced, so if you’re one for aftermarket sights this might be disappointing.

This is a double-action trigger with a long reset and a crisp release. While it isn’t ideal for rapid-fire or target shooting, it’s kind of perfect for concealed carry and self-defense. The long pull compensates for the lack of an external safety and lessens the chances of an accidental pull in a high-stress situation.

The standard LCP magazine has a capacity of 6+1, while the extended grip magazine has a capacity of 7+1. The mag release is ambidextrous, right-handed shooters can reach it with their thumb while left-handed shooters can push it with their trigger finger. The LCP’s mag release is great because it’s easy to push, but not so easy that there’s any risk of it popping out unexpectedly.

Whether looking for a rifle, shotgun, or pistol, most people look for something lightweight. Well, the LCP truly lives up to its name of “lightweight compact pistol.” It’s only 5” long overall, with the barrel accounting for 2.75” of it. Unloaded, it weighs less than 10 oz, and it’s still under a pound with a full load. Ruger set out to create the perfect lightweight concealed carry weapon, and they definitely delivered with this pistol.

This is a .380, lightweight pistol, which can be rough when it comes to felt recoil. Any compact pistol bigger than a .22 is intimidating, and the LCP is so small that someone with even slightly bigger-than-average hands can have a hard time gripping it. However, the recoil is honestly not as bad as you’d think. It utilizes a locked-breach system rather than blowback, which helps mitigate recoil, and a proper grip goes a long way in controlling it, as well. I found that, with all the rounds I tested, the recoil is manageable. It’s a bit tight in the wrist due to its low weight, but still, far from uncomfortable.

The Ruger LCP MSRPs for $259, including the pocket holster, and you can find it for even less at some retailers. If you’re looking for a great concealed carry pistol but don’t want to spend a fortune, the LCP is perfect.

The Ruger LCP is the ideal concealed carry handgun for self-defense. Here’s why:

If you’re looking for a pistol you can count on in a high-stress situation with strong aftermarket support but don’t want to spend a fortune to own it, your best bet is the Ruger LCP.