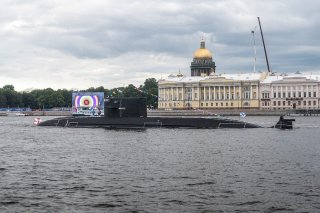 Here’s What You Need to Remember: The second Lada submarine—Kronstadt, the one being referenced by TASS’ source—is now reportedly on the cusp of entering service, following a tortured construction process involving several sweeping revisions. But Kronstadt, too, is a standard diesel-electric submarine.

Russia’s first Lada-class submarine will finally be handed over to the Navy in 2022, according to recent reports.

“The first serial Project 677 Lada submarine is planned to be received in 2022,” a defense industry insider told Russia’s TASS state news. The TASS report noted that this information has not been publicly corroborated by Russian officials.

As first conceived, the Lada-class was designed around a unique air-independent propulsion (AIP) system. This technology comes in different variants, but the core concept is the same: AIP is a propulsion technique that allows a submarine to function without direct access to outside air. Depending on its exact implementation, AIP technology can bring a wide range of performance benefits: notably, reductions in displacement and crew size, significantly reduced noise generation when compared to standard diesel-electric systems, and greater endurance. These enhancements can make AIP submarines an attractive choice for littoral, local, or low-intensity missions that don’t require the virtually unlimited endurance, range, and sustained speeds of nuclear-powered submarines. The Lada boats’ arsenal will include six 533-millimeter torpedo tubes for a total capacity of eighteen torpedoes, as well ten Kalibr cruise missiles.

Several other navies are dabbling in AIP technology—some, with seemingly greater success than Russia. The Chinese People’s Liberation Army Navy’s (PLAN) Type 039A Yuan-class submarines are powered by the proven, widely-established Stirling AIP method—as many as fifteen such submarines are currently in service, with several more under construction. But Russia’s shipbuilding industry has struggled to integrate the fuel cell AIP systems intended for the Lada boats. The first Lada model, Sankt Peterburg, was laid down in 2004 and commissioned six years later with a standard diesel-electric propulsion system; that submarine has since been repurposed into a testbed vessel. The second Lada submarine—Kronstadt, the one being referenced by TASS’ source—is now reportedly on the cusp of entering service, following a tortured construction process involving several sweeping revisions. But Kronstadt, too, is a standard diesel-electric submarine.

It was later revealed that the third Lada boat, Velikiye Luki, will likewise be launched with a traditional diesel-electric propulsion system. Аlexander Buzakov, head of the Admiralty Shipyard in Saint Petersburg, said in late 2019 that there are no plans to equip Project 677 submarines with AIP systems. It is not fully clear if Buzakov was referring only to the next two Lada submarines, or to the entire range. The news puts the future of the Lada-class, which was mainly distinguished from its Kilo-class predecessor by its innovative AIP system, into doubt. At least two more Lada submarines are slated to be laid down in 2022 and commissioned as part of Russia’s 2027 state armament cycle.