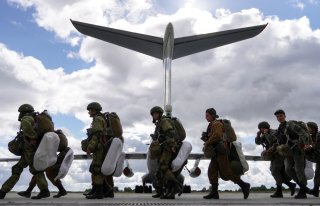 Here's What You Need to Remember: Belarusian troops have never played a major role in the ongoing confrontation between Russia and Ukraine over the former’s 2014 seizure of the Crimean Peninsula and support for pro-Russian secessionist rebels in Ukraine’s eastern Donbass region.

In November, state-run media outlets within Belarus announced that the country would hold joint military exercises with Russia on the two nations’ border with Ukraine—a development that will likely lead to further tensions between the three eastern European countries.

Belarusian troops have never played a major role in the ongoing confrontation between Russia and Ukraine over the former’s 2014 seizure of the Crimean Peninsula and support for pro-Russian secessionist rebels in Ukraine’s eastern Donbass region. The Belarusian government continues to recognize Crimea as a part of Ukraine and has traditionally remained neutral in the conflict in Donbass. However, President Alexander Lukashenko indicated on Monday that Belarus would be on Russia’s side in the event of a conflict between Russia and the West, a sign of Minsk’s geopolitical shift toward Moscow.

In recent months, Russia has increased the number of troops on the border it shares with Ukraine and stoked fears of an invasion. The Kremlin has denied intending to invade Ukraine. But also, Russia has declined to reposition its troops and move them further away from the border.

At the same time, Belarus has faced increasing pressure from European Union countries to resolve the migrant crisis at its western border. EU officials have accused Minsk of fomenting the crisis in retaliation for economic sanctions against Lukashenko and other officials.

The joint Russian-Belarusian exercises were portrayed by Belarusian officials as necessary to account for new military developments in the region. Belarusian Defense Minister Viktor Khrenin claimed that the exercise would take place in the “medium term,” although no concrete date was given.

In a statement, Khrenin indicated that he was “concerned by the militarization” of Belarus’s neighbors, arguing that the presence of Western troops had “forced [Belarus] to plan measures in response.”

In spite of deep personal animosity between Lukashenko and Russian president Vladimir Putin, Russia and Belarus have grown increasingly close after Belarus’s 2020 election, which led to mass protests after Lukashenko was accused of rigging the vote. His prospective challenger, Sviatlana Tsikhanouskaya, has been forced into exile in neighboring Lithuania, and thousands of demonstrators have been arrested and subjected to harsh conditions in prison.

Lithuania, a NATO member, has pressured the bloc to adjust its strategy with regard to Belarus, arguing that Minsk had undergone a major military integration with Moscow.

The integration “brings new challenges to NATO, and NATO should accordingly adapt its plans, strategy and tactic, to be ready to respond," Lithuanian President told a news conference on Sunday.