Is Russia Bringing Back Its Cold War-Era Caspian Sea Monster? 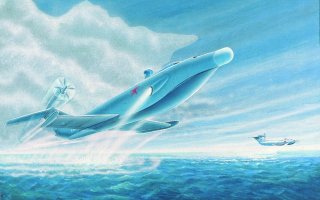 Here's What You Need to Know: Competition in the Arctic is reviving Cold War ideas like the ground effect vehicle.

Ground effect vehicles were built for use with the Soviet Navy in the 1980s and 1990s. Perhaps the best-known of these, the A-90 Orlyonok was used primarily as a high-speed transport troop and cargo transport for use in the Black and Caspian Seas.

As I previously wrote, a larger ground effect vehicle, the Lun-class, was built in the late 1980s and caused a bit of a stir within the American intelligence community, which did not know what the Lun-class was, and dubbed it the Caspian Sea Monster. This massive eight-engine ekranoplan was both the heaviest and largest aircraft in existence from the mid-1960s to the late 1980s.

A few years ago, a Twitter account linked to the Russian embassy in South Africa tweeted that Russia would begin building a new ground effect vehicle sometime this year. The GEV in question appears to be called Chaika-2. The company website says that the Chaika-2 is designed for ferrying “high-speed passengers and cargo transportation in marine littoral areas,” and seems to suggest that the GEV can be used in cold weather for landing on both snow and ice. This crucial detail is why GEVs may be important to Russia.

A 2018 article by the Russian state-owned Tass news agency outlined why GEVs are useful, saying that they can be used to ensure Russia’s Northern Sea Route is open and protected by units hovering and monitoring the area.

The Arctic is becoming more and more contested as it melts and remains unfrozen later into the year, and could eventually be ice-free year round. This would be a boon to Russian shipping, as routes to North America and Asia could be significantly shortened, and may make oil and gas exploration easier.

Multiple armed ground effect vehicles could serve as a fast-reaction force for patrolling Russia’s newly-unfrozen north—or be a powerfully persuasive reason for staying out of the region during a conflict. Still, it remains to be seen how seriously to take this erkanoplan project, though the Arctic has definitely become a region of increasing importance to Russia. We’ll see what happens to the new Caspian Sea Monsters.