Russia Continues to Invest in the World's Unluckiest Aircraft Carrier 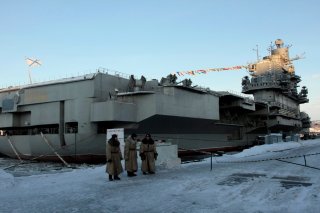 Here's What You Need To Remember: So vast is the extent of the work that needs to be done on Admiral Kuznetsov that it may prove more cost-effective in the long run to simply procure a new carrier, or—as an increasing number of Russian defense experts are already doing—to ask whether or not the Russian Navy really needs an aircraft carrier in the first place.

One might assume that the combined weight of these mishaps would place Admiral Kuznetsov a hair’s breadth away from the scrap heap, but the Kremlin apparently has other plans.  Russian officials insist that Kuznetsov will re-enter service by the first half of 2023, replete with electronics, structural, and landing control upgrades, as well as a revamped weapons suite. Russia’s military and civilian leadership appear to have decided that Admiral Kuznetsov is, in a sense, too big to fail, and is willing to make massive investments in order to ensure the ship’s survival into the coming decades.

This article is being reprinted due to readers' interest.