Is Russia’s One and Only (And Really Old) Aircraft Carrier an Actual Threat? 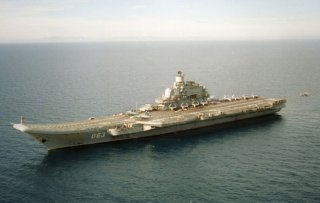 Will Russia’s lone aircraft carrier sail once again into open waters, ready for combat and prepared to launch massive, high-speed air attacks? That’s perhaps not entirely clear, at least in terms of its actual performance ability, yet Russian news reports do say the carrier is now being overhauled and upgraded to re-enter service in 2023.

“The overhaul and upgrade of the Admiral Kuznetsov will be completed in the first half of 2023. The avionics, flight deck with the ski jump, electric equipment, the power plant will be replaced. The carrier will receive a new fully domestic takeoff and landing control system. The airpower will remain the same. The carrier will have no attack weapons, it will be armed with Pantsir-M antiaircraft complex.” said Vice President of the United Shipbuilding Corporation (USC), Vladimir Korolev, according to a TASS report quoted by NavalNews.

While only one carrier, a single platform of this kind can by itself project substantial forward operating power and hold areas at risk from great distances out over the ocean. Certainly, the Russian Navy is quite small compared to the U.S. Navy and likely not in a position to compete in any kind of open-water maritime engagement. But that by no means indicates that it is not a threat. Certainly, Eastern European NATO countries could be vulnerable to carrier-launched air attacks coming from the Black Sea, and there are other parts of the world that could of course be held at risk from an off-shore carrier.

However, what about its upgrades? Would it be vulnerable to hostile attack with an advanced, layered ship defense system or Carrier-Strike-Group-like formation of surrounding ships? The Russian paper says the carrier will get new electric equipment along with a new powerplant and a new take-off and landing control system. TASS goes on to say the carrier will have “no attack weapons,” and instead be armed with Pantsir-M anti-aircraft weapons. So while there do appear to be some air defenses for the ship, it is by no means clear if it has anything substantial by way of ship defenses.

Regardless, there are other pressing questions such as what kind of aircraft can it launch? Russia does not appear to have much in the way of carrier-launched aircraft, a circumstance which of course limits its ability to project power and conduct serious or large-scale attack operations with multiple sorties.

Upgrades to the existing platform, while still unknown in many respects, are unlikely to rival the suite of new technologies built into the new Navy Ford-class carriers such as an electromagnetic powerplant, new 104 megawatts worth of power generating capacity, and electric weapons elevators for fast reloading.